Los Angeles - At least two people were injured Friday in a shooting incident at Los Angeles' international airport, parts of which were evacuated as police swarmed into the area, officials and reports said. 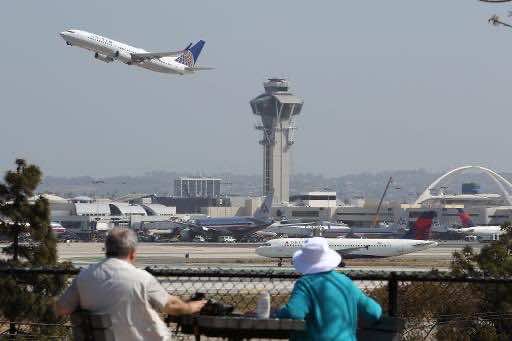 Los Angeles – At least two people were injured Friday in a shooting incident at Los Angeles’ international airport, parts of which were evacuated as police swarmed into the area, officials and reports said.

But police said there was “no mass casualty incident” at the airport.

Live TV footage showed armed police on the top of parking structures, apparently still looking for a possible gunman, while multiple ambulances were parked outside a terminal building.

“There is an incident underway at LAX,” the airport said on itsTwitter feed, adding: “Ground stop now in effect at LAX after shooting in terminal.”

The LA Fire Department tweeted that its officers were assisting law enforcement at a “multi-patient incident at LAX.”

But LA Police Department spokesman Guss Villanueva told KTLA 5 television that he believed there were two of three people injured, as well as the gunman.

“There’s no mass casualty incident here at this point,” he said.

TV footage showed one person on a gurney, being loaded into an ambulance. Another victim was seen being rushed away on a wheelchair.

The incident began at around 9:30 am (1630 GMT) at Terminal 3 of the airport, according to the LAX Twitter feed.

It was unclear if a shooter or shooters were still at large.

A suspect was wounded and an airport worker for the Transportation Security Administration was shot, the LA Times reported, adding that Terminals 2 and 3 were evacuated.

CBS2 television reported that a second suspect was taken into custody, about 45 minutes after the incident erupted.

Tory Belleci of the television show “Mythbusters” tweeted: “Heard gun shots then everyone starting running for the door. Not sure if anyone was hurt. #LAX.”

Hundreds of travellers could be seen streaming away from at least one terminal building, while multiple ambulances and emergency vehicles rushed to the scene.

Other passengers lined up on the tarmac near an aircraft, as officials scrambled to manage flights and travellers amid the unfolding incident.