Rabat — A young Moroccan tore down the Algerian flag from the roof of that country's consulate in Casablanca during a protest Friday over Western Sahara, sparking an angry protest from Algiers. 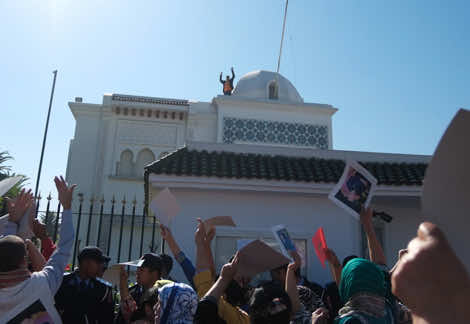 Rabat — A young Moroccan tore down the Algerian flag from the roof of that country’s consulate in Casablanca during a protest Friday over Western Sahara, sparking an angry protest from Algiers.

A video widely circulated on Internet sites in Morocco shows the man climbing the walls of the building to reach the flag.

A police official told AFP the man, a member of a group called “Royalist Youth”, was arrested and would appear before a judge.

Dozens of people had gathered outside the consulate in Morocco’s economic capital to protest over comments by Algerian President Abdelaziz Bouteflika on disputed Western Sahara.

In a speech read out in Bouteflika’s name at a meeting in Abuja, he said an international mechanism to monitor human rights in Western Sahara was needed “more than ever.”

Bouteflika referred to “massive and systematic human rights violations that take place inside the occupied territories to suppress the peaceful struggle” of the Sahrawi people.

Rabat in protest recalled its ambassador to Algiers.

Algeria angrily condemned Friday’s incident at its Casablanca consulate and summoned the Moroccan ambassador to the foreign ministry in Algiers.

“The individual who had the time and opportunity to tear down the national flag from its pole was not arrested until he carried out the deed,” Algerian foreign ministry spokesman Amar Belani said.

Belani, quoted by the national news agency APS, said police “did not appear to regard the protection of the Algerian consular offices and personnel as their pressing mission.”

“This serious act would not have been possible without the outburst of hatred and defamation from a part of the Moroccan political class and media … against Algeria,” he said.

The spokesman said it was the duty of the host country under international law to protect diplomatic missions on its territory.

The spat is the latest between the North African neighbours whose decades-old rivalry centres on Western Sahara, annexed by Morocco in 1975 in a move never recognised by the international community.

Rabat has proposed broad autonomy for the phosphate-rich territory under its sovereignty.

This is rejected by the pro-independence Polisario Front, who are based in the western Algerian city of Tindouf and fought Moroccan troops for a decade and half until the United Nations negotiated a ceasefire in 1991. 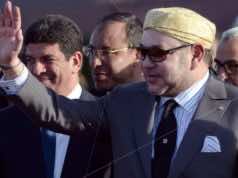 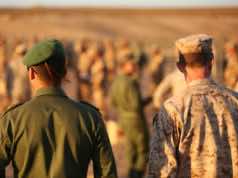 Only France Can Prevent a Morocco-Algeria War from Erupting