CAIRO  – The family of ousted Egyptian president Mohamed Morsi said on Sunday the deposed leader is unfazed by what it described as "trumped up" charges against him, and asserted they would not attend the first session of his trial, due on Monday. 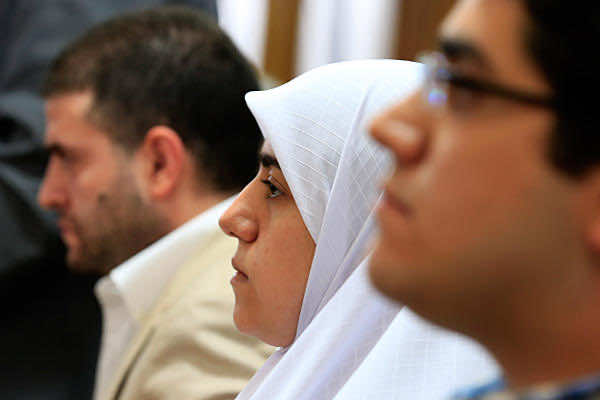 CAIRO  – The family of ousted Egyptian president Mohamed Morsi said on Sunday the deposed leader is unfazed by what it described as “trumped up” charges against him, and asserted they would not attend the first session of his trial, due on Monday.

In a statement sent exclusively to Anadolu Agency, the family cast doubts on the authenticity of statements that the Egyptian daily Al-Watan claims that Morsi had said during his meetings with visiting politicians and rights groups from his unknown detention place since July 3.

The paper said it obtained leaked recordings of Morsi’s meetings at his detention place, which is still being kept secret.

The family said releasing the statements one day before the trial’s first session aims to influence the public.

The statement was signed by Morsi’s elder son, Osama, who identified himself as the official spokesman of the “abducted legitimate Egyptian president”.

“The president is steadfast despite months of violations against his rights as a president and a citizen and despite all the smear campaigns launched against him by a people of no value,” Morsi’s family wrote in the statement.

It said the ousted president would not be brought down to his knees by “trumped up” charges or “kangaroo courts.”

Morsi is due to appear for the first time since his July 3 ouster in court to face charges of inciting the killing of demonstrators outside the presidential palace in Cairo in December when he was a president.

At least 14 other Muslim Brotherhood leaders and ex-presidential aides are due to appear with him in court as well.

The families of seven of the defendants in the case already said they would not attend the trial because they don’t recognize the court’s legitimacy.

According to al-Watan newspaper, Morsi said during a meeting with Catherine Ashton, the high representative of the European Union for foreign affairs and security policy, that he was illegally detained and this should not happen to a head of state.

He called on the European Union and the United States to intervene for his reinstatement, promising to redress the mistakes he had committed during his one year of rule, according to the newspaper, which said it has video and audio recordings of Morsi’s statements.

It said Morsi expressed objection to holding a public referendum to decide whether he should stay in office or hold early presidential elections, saying the Egyptian constitution did not contain articles that make this possible.

Al-Watan said it would post the video and audio recordings of Morsi’s statements to prove the authenticity of what it marketed as a “scoop.”

It said Morsi insisted during his meeting with another political delegation to describe his ouster as a “military coup”, saying that he is still the president according to the constitution.

Morsi, however, said he was being treated well at his detention place.

He said he rejects his trial, saying the president should have different grilling procedures according to the constitution, the newspaper said.

“If I go to the court I will defend myself before the judges,” Morsi was quoted by the newspaper in its report as saying. “I am not involved in the killing of demonstrators. I will say this to the judges.”