CAIRO: Human Rights Watch has accused Egypt's military-installed authorities of failing to investigate the killing of protesters by the security forces, mainly on October 6, when deadly clashes rocked Cairo. 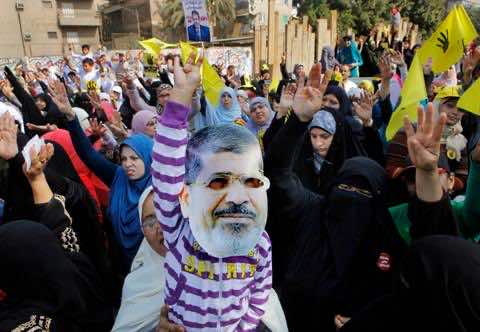 CAIRO: Human Rights Watch has accused Egypt’s military-installed authorities of failing to investigate the killing of protesters by the security forces, mainly on October 6, when deadly clashes rocked Cairo.

The New-York based group on Saturday charged that three weeks since police used lethal force to break up protests of supporters of ousted president Mohamed Morsi, the authorities have not yet questioned or said they intend to question security forces about their use of firearms on that day.

“In dealing with protest after protest, Egyptian security forces escalate quickly and without warning to live ammunition, with deadly results,” HRW’s Joe Stork said in a statement.

On October 6, at least 57 people were killed nationwide, but mostly in Cairo, when security forces cracked down on supporters of Morsi who were trying to march towards the iconic Tahrir Square where backers of the military were celebrating the 40th anniversary of the Arab-Israeli war.

The clashes were the deadliest since the storming by security forces of two pro-Morsi camps in Cairo on August 14 in which hundreds were killed.

Stork said 1,300 people have died in Egypt since July.

“What will it take for the authorities to rein in security forces or even set up a fact-finding committee into their use of deadly force?” he asked.

HRW said that throughout the past three months, the authorities had not yet established a fact-finding committee or attempted to rein in security forces.

But when it came to violence by protesters, prosecutors have arrested, investigated and prosecuted them for assault and use of violence, the watchdog said.

So far Egypt’s public prosecutor has referred only one case involving policemen to trial.

Four policemen are facing trial over the deaths of 37 Islamist prisoners teargassed in a transport truck in August.

The four are charged with manslaughter after prisoners arrested during clashes died from suffocation when police fired teargas canisters into the truck transporting them to a prison.

“Egypt showed in the case of the police officers who fired tear gas into a truck full of detainees that it is capable of holding security forces accountable,” said Stork.

“It should do the same when police officers open fire on largely peaceful demonstrators.”

HRW said that a forensic medical source had revealed that live ammunition had caused the deaths of 44 of the 49 people killed in Cairo on October 6.

The source told HRW that 20 had fatal wounds to the chest, 17 to the head, six to the stomach, four to the limbs and two to multiple places on the body, and that one victim was a minor.

“That Egyptian police are using excessive lethal force is nothing new, but now they open fire as if they do not fear being held to account,” Stork said.

“Until Egypt’s military rulers take strong steps to rein in the police force, the killing of protesters will continue.”