CAIRO  –"Each of the two camps seeks to achieve quick victories and control the volatile political scene," Ghobashi said. 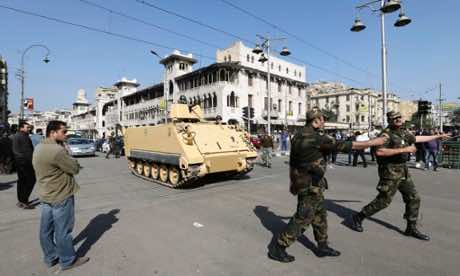 CAIRO  –“Each of the two camps seeks to achieve quick victories and control the volatile political scene,” Ghobashi said.

With the trial of Egypt’s ousted president Mohamed Morsi few hours away, the Egyptian army and the Muslim Brotherhood continued their psychological warfare to control the political narrative in this volatile country.

“Egypt has been in the grip of a psychological warfare since Morsi’s ouster, but this warfare has intensified in the past few days,” Mukhtar Mohamed Ghobashi, the deputy head of the local think-tank Arab Center for Political and Strategic Studies, told Anadolu Agency.

“Each of the two camps seeks to achieve quick victories and control the volatile political scene,” he added.

Morsi’s is due to stand trial on Monday on charges of inciting the killing of peaceful demonstrators outside the presidential palace in December.

It will be his first public appearance since his ouster by the powerful military on July 3.

Ghobashi said both parties have their own problems.

The army and its supporters, on one hand, are trying to present Egyptians with a convincing alternative to the Muslim Brotherhood whose year in power spawned public resentment towards the group.

But they have been unable to do that because of the difficult economic problems that continue to trouble the country.

The pro-Morsi National Alliance for the Defense of Legitimacy, on the other hand, has set the bar high with their demand for the reinstatement of Morsi, Ghobashi added.

“This is difficult to achieve given the current political conditions in Egypt,” he asserted.

“This, both camps have resorted to psychological warfare to make quick gains and control the political narrative” before Egyptians head to polling stations to vote on the constitution and later elected a new parliament and president, Ghobashi said.

He cited Interior Minister Mohamed Ibrahim’s recent remarks that the Muslim Brotherhood had almost lost its ability to mobilize protesters.

“It will be a normal day,” Ibrahim argued.

The National Alliance for the Defense of Legitimacy, however, has vowed to stage unprecedented rallies on Morsi’s trial day.

“The coup leaders are up for a week of mass demonstration,” Ali Khafagi, the FJP Giza youth leader, told Anadolu Agency.

“We will show the world that we have a cause and that we are not backing down,” he added.

“Our continuing protests far exceed their abilities and that is why they have resorted to imposing emergencies and imposing a curfew,” Khafagi suggested.

Experts say despite the heavy-handed crackdown on pro-Morsi protests, which saw hundreds of supporters killed and detained, the pace of demonstrations has not slowed down, wearing out security forces and affecting the national economy negatively.

The alliance, Morsi’s main support block, has urged supporters to gather outside the courthouse where Morsi would be tried.

It also urged democracy advocates to rally outside Egyptian embassies and consulates around the world.

Deputy Chairman of the Islamic Party Magdy Salem, also a leader of the Alliance, has reiterated their determination to defeat the “military coup” against Morsi.

He said the army-installed administration uses all legal and illegal tactics to break the will of Morsi’s supporters.

“But these practices only make us stronger,” Salem told Anadolu Agency.