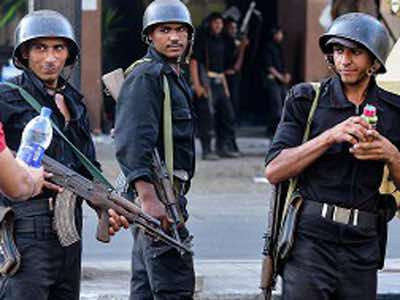 A third policeman was wounded when the armed men fired automatic weapons from their car toward the officers’ checkpoint, the sources said.

Since the army deposed and arrested Morsi, Egypt’s first democratically elected president, on July 3, near daily attacks have claimed dozens of lives among police and soldiers across the country.

The army-installed interim government has accused pro-Morsi Islamist groups of carrying out the attacks.

Armed Islamist groups, some linked to Al-Qaeda, have claimed most of the unrest, which they say is in response to a bloody crackdown against Morsi supporters in which more than 1,000 people have been killed.

Morsi’s backers accuse the government of fabricating the charges against him and have called for anti-military protests, raising fears of new clashes.

Held by the army at a secret location since his ouster, Morsi goes on trial Monday accused along with 14 others of inciting the murder of protesters outside the presidential palace in December 2012.

The charges against Morsi could lead to the death penalty or life in prison.

More than 2,000 members of Morsi’s Muslim Brotherhood, which won heavily in general elections two years ago, have been arrested since mid-August.