CAIRO  – The trial's first session kicked off at 10:30am local time, according to state television. 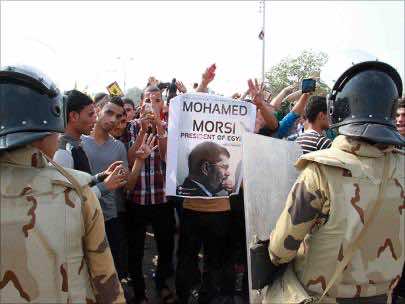 CAIRO  – The trial’s first session kicked off at 10:30am local time, according to state television.

The trial of ousted Egyptian President Mohamed Morsi began Monday morning at the Police Academy in eastern Cairo amid an unprecedented security presence that included both police and military personnel.

The trial’s first session kicked off at 10:30am local time, according to state television.

Morsi does not recognize the legality of the trial, while members of his family say they will not attend Monday’s session for the same reason.

The trial has been accompanied by unprecedented security procedures countrywide.

The streets of capital Cairo have been turned into a military barracks, particularly in central Cairo’s Tahrir Square and the vicinity of Cairo University, where democracy supporters had staged a six-week sit-in that was violently dispersed by security in mid-August.

An alliance of Islamist forces and pro-democracy groups have urged Egyptians to join mass protests against the trial.