CAIRO– Police step up their presence outside the courthouse as Morsi supporters continue to stream in. 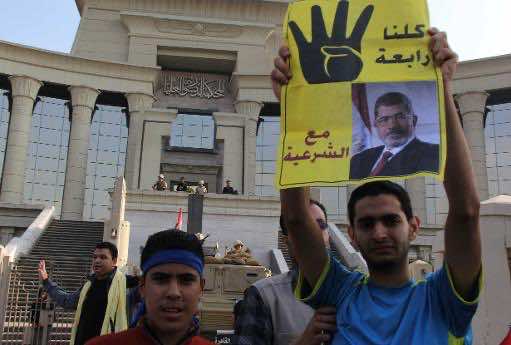 CAIRO– Police step up their presence outside the courthouse as Morsi supporters continue to stream in.

Tension prevailed outside the Police Academy in eastern Cairo where the trial of ousted President Mohamed Morsi began Monday morning, punctuated by occasional clashes between supporters and opponents of the deposed president.

Police stepped up their presence outside the courthouse as Morsi supporters continued to stream in.

“Illegitimate, illegitimate!” protesters chanted, referring to the trial which they believe lacks constitutionality. “Down with military rule!”

Authorities have cordoned off the area around the Police Academy, which had also served as the venue for the earlier trial of toppled President Hosni Mubarak.

Local and foreign media could be seen in force outside Gate 8 of the Police Academy, used by lawyers to enter and exit the building.

A police helicopter, meanwhile, hovered over the area.

At one point, clashes erupted between Morsi supporters and reporters from an Arab news channel after the former accused the channel of bias against the ousted president.

Some members of Morsi’s defense team voiced anger after police told them that they could not attend Monday’s trial proceedings without special permits.

Relative calm was restored with the arrival of head defense lawyer Selim al-Awa, who told angry lawyers that police were only following orders.