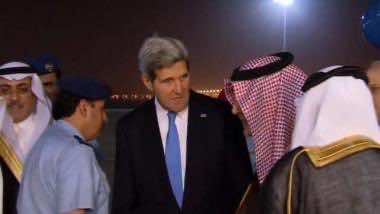 RIYADH- Secretary of State John Kerry called Monday for US-Saudi ties to stay “on track” ahead of talks with King Abdullah, after Saudi anger over US policy in the region flared into the open.

The top US diplomat was hastily dispatched to Riyadh to patch things up after rare complaints from the top Saudi leadership emerged in recent weeks.

Kerry acknowledged things were tough as the region is rocked by the turmoil of the Arab Spring, which is reshaping the geopolitical landscape.

“Right now we have some very important things to talk about to make certain the Saudi-US relationship is on track, moving forward and doing the things that we need to accomplish,” he told US embassy staff in Riyadh.

The upheaval sweeping parts of the Middle East has witnessed the rise of powerful new extremist groups in Libya and Syria, with Iran accused of fomenting unrest to aid Syrian President Bashar al-Assad in his 31-month battle against rebel forces.

Saudi Arabia, locked in a decades-long rivalry with Iran, is concerned that proposed Syrian peace talks could leave a Tehran-backed regime in place in Damascus and that a breakthrough in nuclear negotiations could also lead to a US rapprochement with its arch foe.

Kerry paid tribute to the conservative oil-rich kingdom’s traditional role in the region, praising the Saudis as “really the senior player in the Arab world.”

Washington and Riyadh shared many current concerns, he said, highlighting the difficult transition in Egypt, the war in Syria and Iran’s nuclear ambitions.

“I particularly wanted to have the opportunity to visit with his majesty the king, ” Kerry told staff of the American mission in Riyadh’s diplomatic quarter.

He repeated US assurances that Iran “will not get a nuclear weapon” after stressing a day earlier, in a veiled warning to Tehran, that Washington would stand by its friends.

“We will be there for Saudi Arabia, for the Emirates, for Qataris, for the Jordanians, for the Egyptians and others. We will not allow those countries to be attacked from outside. We will stand with them,” Kerry told reporters Sunday during a brief visit to Cairo.

In an unprecedented move last month, Saudi Arabia turned down a coveted non-permanent seat on the UN Security Council in protest at the world body’s failure to end the war in Syria, which has killed more than 120,000 people.

In Cairo, Kerry acknowledged that while there might be differences over “tactics” in ending the Syrian conflict, the goal for the United States and its allies was the same — a transition of power.

The US has been pressing Syria’s opposition to attend the Geneva peace talks with the Assad regime, slated for late November.

And it won the support of the Arab League, which meeting late Sunday in Cairo said it would “encourage” the Syrian opposition to attend the talks aimed at ushering in a transitional government.

Syria’s opposition has refused to attend unless Assad’s resignation is on the table — a demand Damascus rejects.

Kerry’s 11-day tour comes at the start of a key week, with talks scheduled in Geneva on trying to fix a date for the Syria peace talks and a new round of nuclear negotiations between six world powers and Iran.

Saudis ‘clear about their concerns’

Kerry first held talks Monday with Saudi Foreign Minister Saud al-Faisal, before a palace meeting with the king for their first encounter since he became secretary of state.

Saudi Arabia has also eyed warily international moves to engage Iran on its nuclear programme following the election of President Hassan Rouhani, a reputed moderate who held a landmark phone call with US President Barack Obama in September.

Iranian negotiators are due to hold a new round of talks with Western powers, dubbed the P5+1, in Geneva on Thursday and Friday.

Analysts said while ties between the US and Saudis are strained they are unlikely to break completely.

“Despite the Saudi outcry, the bedrock of US and Saudi ties — intelligence coordination and military containment of Iran — is solid,” wrote Frederic Wehrey, senior associate in the Middle East programme at the Carnegie Endowment for International Peace.