CAIRO - An Egyptian court on Monday adjourned to January 8 the trial of ousted president Mohamed Morsi over his alleged involvement in the death of protesters during his year in power. 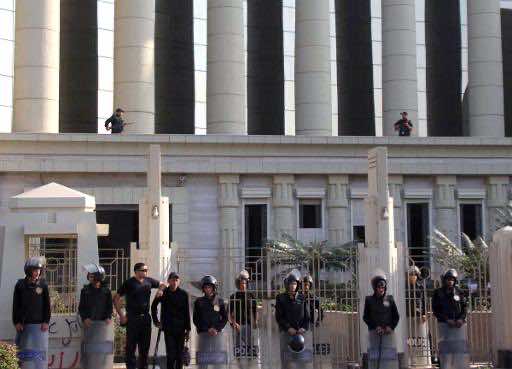 CAIRO – An Egyptian court on Monday adjourned to January 8 the trial of ousted president Mohamed Morsi over his alleged involvement in the death of protesters during his year in power.

Morsi, in his first public appearance since the army deposed him in July, rejected the proceedings and told the court: “I am Dr. Mohamed Morsi, the president of the republic… This court is illegal,” an AFP correspondent attending the trial reported.

He slammed his overthrow by the army and called on military leaders to face trial.

“This was a military coup. The leaders of the coup should be tried. A coup is treason and a crime,” Morsi said.
Defiantly, Morsi arrived in court wearing a suit rather than the customary white detention clothes.

Two of his co-defendants, senior Muslim Brotherhood leaders Essam al-Erian and Mohammed al-Beltagui, chanted “Down with military rule” at the start of the hearing, and applauded Morsi when he walked in.

Morsi came to power in June 2012 in the country’s first free elections, made possible by a popular uprising a year earlier.

He and 14 others are charged with inciting the deaths of protesters outside the presidential palace in December 2012.
They face the death penalty or a life sentence.