TRIPOLI - Protesters have kept up their blockade of the main oil facilities in Libya, where production has fallen 80 percent, the country's National Oil Corp said Monday. 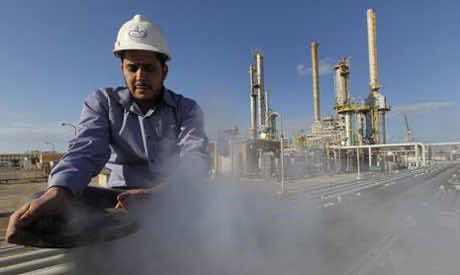 TRIPOLI – Protesters have kept up their blockade of the main oil facilities in Libya, where production has fallen 80 percent, the country’s National Oil Corp said Monday.

“Current output is estimated to be running at 250,000 barrels per day,” down from 1.5 million bpd before the protests, NOC official Mohamed al-Harairi told AFP.

He said exports from Al-Hariga terminal in eastern Libya, which the government had said would resume by Monday, have not gone ahead for logistical reasons.

“Marketing procedures with clients are holding up the start of crude exports from this port,” he said.

“The crisis has been resolved, as announced by the government. Two cargoes of crude are ready for export” from Al-Hariga, he said, without giving a timeframe.

But Harairi said that output from Al-Sharara field, which produces 330,000 bpd, had been blocked by residents of the southern region of Ubari since October 28.

The protesters are demanding a fairer distribution of the region’s resources to improve living conditions, with similar actions mounted elsewhere in Libya since its 2011 revolt which ousted strongman Moamer Kadhafi.

Protesters demanding jobs have been blocking other terminals since late July, causing around $13 billion in losses to Libya’s oil-dependent economy, authorities say.