TRIPOLI - Talks between Libyan authorities and protesters blockading oil terminals have reached a deadlock after three months, prolonging a crisis that has cost the increasingly volatile country an estimated $13 billion. 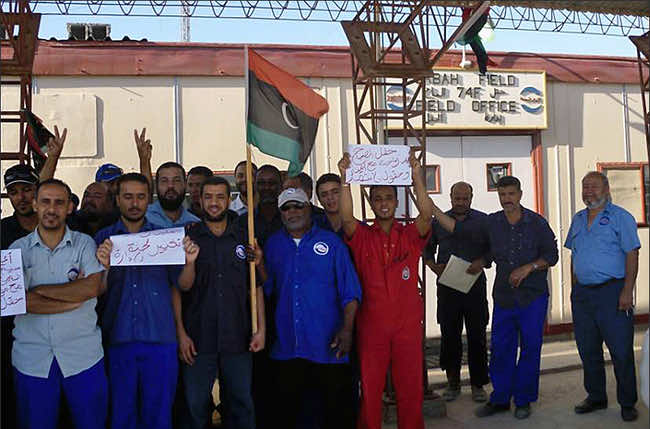 TRIPOLI – Talks between Libyan authorities and protesters blockading oil terminals have reached a deadlock after three months, prolonging a crisis that has cost the increasingly volatile country an estimated $13 billion.

The protests have caused an 80 percent drop in production in a country that is almost entirely dependent on oil and gas for its foreign exchange earnings, and which is struggling to impose order after the 2011 revolution that toppled Moamer Kadhafi.

Security guards from the oil installations have been on strike since the end of July, blockading the country’s main terminals at Zueitina, Ras Lanouf, and Al-Sedra in eastern Libya, where the Arab Spring-inspired uprising began.

Abdelwahab al-Gaied, head of the crisis commission in the General National Congress, the country’s highest political authority, said Monday that the two sides have reached a stalemate in talks.

“The oil terminals crisis is continuing and the situation is totally deadlocked,” he said.

The commission, formed in August, has been charged with leading talks with protesters to resolve the crisis.

Speaking during a plenary session of the GNC broadcast live on state television, Gaied said the “protesters have dug in on their positions.”

The crisis has worsened as the government and protesters have traded accusations, with Tripoli saying that the guards have tried to sell crude oil to enrich themselves and the strikers accusing the government of corruption.

The prospect of a quick resolution to the dispute has been further complicated by the demands of some of the striking guards, who also want greater autonomy for the eastern Cyrenaica region.

Ibrahim Jodhran, head of the protesters who support federalism for the east, has named himself head of the Cyrenaica Political Bureau, and last week announced the formation of a local government for the region.

The announcement angered Tripoli, which said it considered the body “outlaws.”

The crisis has highlighted the weakness of the post-revolutionary state, which has been unable to rein in thousands of former rebels who fought to topple Kadhafi and have since formed militias that control large swathes of the country.

The oil blockades have seen production fall to 250,000 barrels per day, down from 1.5 million bpd before the crisis erupted in July, Mohamed al-Harairi, an official at Libya’s National Oil Company told AFP on Monday.

The strikes in Libya’s oil sector, which accounts for 96 percent of state revenues, has caused losses estimated at $13 billion (10 billion euros) to date, authorities say.

Crisis could force Libya to dip into reserves

If no solution is found, the strikes could take a major toll on Libya’s economy, the representative of an international monetary organisation warned.

“If the crisis drags on, growth in 2013 could be negative and the government will be forced to dip into its reserves to pay salaries and honour its commitments,” the source said on condition of anonymity.

Libya’s reserves are estimated at between $130-140 million, the source added.

In its most recent report, the International Monetary Fund forecast negative growth of 5.1 percent for Libya in 2013 because of the oil terminal strikes, compared with growth of 104.5 percent in 2012.

The expected resumption of exports from the Al-Harriga terminal in the east, announced on Monday by the government, did not happen for logistical reasons, Harairi said.

“The port is totally controlled by the Arabian Gulf Oil Company (AGOCO, an NOC subsidiary),” he said.

“Marketing procedures with clients are holding up the start of crude exports from this port.”

Harairi insisted “the crisis has been resolved” at the terminal, which has a capacity of 110,000 bpd, adding that “two loads of crude are ready for export.”

But he said a dispute at Al-Sharara field, which produces 330,000 bpd, has yet to be resolved, saying “talks are still under way” to end the blockade there.

Al-Sharara has been blockaded since October 28 by residents of the southern region of Ubari protesting against their “marginalisation” and demanding oil revenues be distributed more fairly to improve their living conditions.