MADRID - Spain has installed barbed wire on the triple border fence that separates its north African territory of Melilla from Morocco, a key entry point into Europe for illegal migrants. 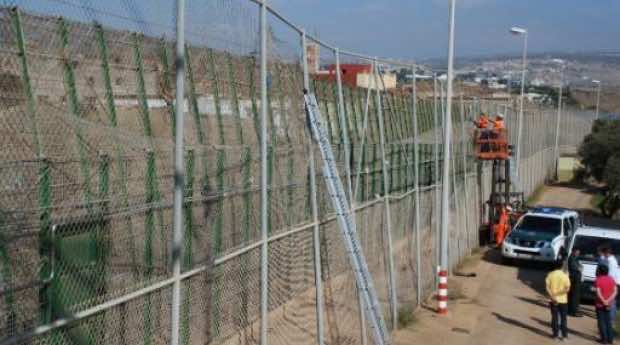 MADRID – Spain has installed barbed wire on the triple border fence that separates its north African territory of Melilla from Morocco, a key entry point into Europe for illegal migrants.

Barbed wire started being placed on the top of several sections of the seven-metre (23-foot) high fence last week to “reinforce security a bit”, a spokesman for government of Melilla said Monday.

Barbed wire had been used before in Melilla but was removed from the top of the border fence in 2006 after causing injuries to migrants as they tried to illegally enter the territory.

Forty-eight surveillance cameras already watch over the 11-kilometre (seven-mile) long fence which loops around the city until it reaches the Mediterranean coast.

At night the fence is lit up along its entire length to help spot migrants trying to enter the Spanish territory, which has 80,000 inhabitants.

The Spanish branch of Amnesty International said it was “deeply worried” over the installation of barbed wire on the border fence.

“The response of the Spanish government to the migratory pressure is moving away from the respect of the rights of people who try to enter our country and is a serious step backwards,” it said in a statement.

About 3,000 migrants tried to scale the border fence between January 1 and September 17, compared to 1,610 during the same period last year, according to Spanish interior ministry figures.

Nearly four-fifths, 77.3 percent, were prevented from entering the territory by Spanish and Moroccan security forces.

Melilla and Ceuta, another Spanish territory on the north African coast, have the European Union’s only land borders with Africa.