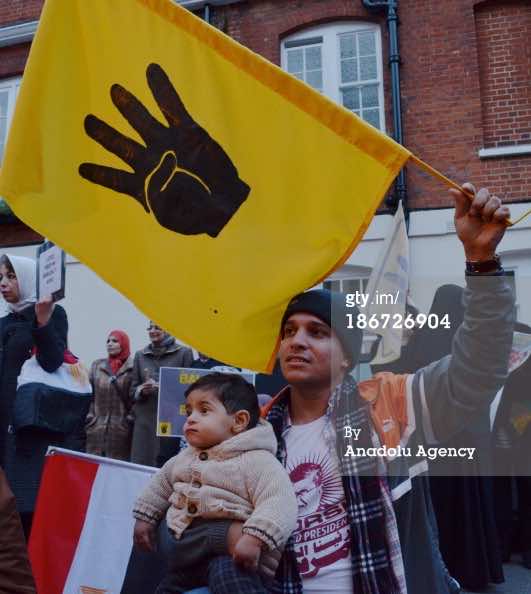 Following the worldwide protest call of National Alliance for Supporting Legitimacy and Rejecting the Coup, British Egyptians came together after work at an evening protest in capital London on Tuesday.

Organized by the “British Egyptians for Democracy (BE4D), about 50 demonstrators came together in front of the Egyptian Embassy in London to show their support to the Egyptian people in their struggle to restore democracy and demanded the immediate release of all political prisoners, including the country’s first elected President Mohammad Morsi.

Demonstrators chanted slogans in Arabic saying, “If Morsi aggravates you, then Morsi, Morsi”, “Down down military rule”, “We greet the steadfastness of our president” and “Power, faith, steadfastness; Morsi’s people are everywhere”. Activists carried the flag of Egypt and other flags with “Rabia” signs on them.

– “We have to be stronger and patient”

Doctorate student at the Imperial College, 23-year-old Abrar told Anadolu Agency that they attended the protest to show their support that they were with the ousted President Mohamed Morsi. She added, “Especially yesterday, those responsible for the military coup, they tried to show the president weak but he was very strong. So this actually gave us even more persistance. This military coup is going to fail, but we have to be stronger and patient.”

Abrar pointed out all the activists attending the demonstration after work and school in the evening and stated, “This shows that they are more persistent now. The president president gave us more confidence.”

She noted that her mother was staying with her in London as Egyptian capital Cairo was too dangerous to be there, she highlighted, “The city is not secure not because of thieves, but because of when you say your opinion this might be harmful to you.”

Moreover, citizens advice bureau worker and law student Eglal Nagib stressed that it was “crazy” to lock up their president as they did not have an elected president for 60 years. “A lot of people came out to vote and went through the ballot box, democracy they were going on about…. There is no democracy now. No democracy, no nothing… All happened, ‘we are just going to take your elected president, put him in a prison and we are going to run the country the way we want. And that is not what it is, we chose this president, so we want him to finish his term” added Nagib.

During the protest a Rabia sign and two photos of Mohamed Morsi were reflected onto the building of Egyptian Embassy in London’s South Street via a projector.