INEZGANE, Morocco - I will always remember the great trip I experienced some thirty five years ago using the famous American public transportation bus known as Greyhound across an important part of the United States. 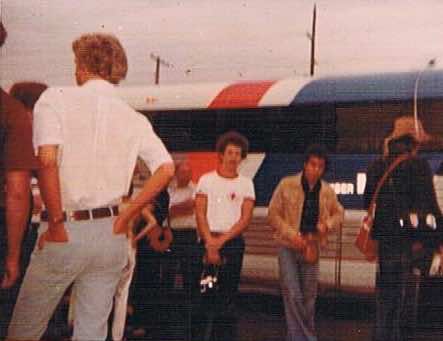 INEZGANE, Morocco – I will always remember the great trip I experienced some thirty five years ago using the famous American public transportation bus known as Greyhound across an important part of the United States.

We (American Field Service exchange students) were heading to New York on the way back to our respective home countries. The first leg of the trip for some of the South Western States’ exchange students was by plane from Albuquerque, New Mexico to Denver, Colorado then to Tulsa, Oklahoma. The Greyhound bus part started two days later from Tulsa where we bid farewell to our host families and to the great “Oil Driller” then headed to Little Rock, Arkansas where the local and state media covered our arrival and did some reporting about our destination and the activities of the American Field Service organization.

One of the peace forwarding messages of the AFS organization was: “Shake the world, start with my hand”, a message some of us displayed through pins we attached to our T-shirts or jackets. That message was often a helpful ice-breaker that helped us a great deal in making new international friends. The weather was sunny in Little Rock and somewhat hot as well. Our next destination was Memphis.

When we embarked on this new experience of exploring what we could see of the State of Tennessee, it seemed to us we entered a different type of country where everything was lush green and where modern, mechanized agriculture was throne queen over infinite miles and miles of rich, fertile and productive soil. When our bus entered the city of Memphis, It immediately came to my mind that it was quite a heterogeneous city; a real melting pot unlike Little Rock back then. I fell in love with Memphis at first sight from behind the Greyhound bus windows. Among other things, it reminded me of Memphis in ancient Egypt and the great majestic Tennessee that flowed next to it reminded me of the “eternal” Nile River portrayed in my history and geography books.

The struggle of the people of Memphis , like that of many Americans, through the years of the civil rights movement and the fact Memphis hosted Doctor Martin Luther King, Jr. during an essential part in the life of the movement makes it, in my modest view, a historical, vibrant and ambitious city. Egypt’s Memphis and its namesake are great legends both in Ancient Egypt and in present day USA. Memphis we visited is home of the Rock n’ Roll star and legend Elvis Presley who impacted and inspired whole generations of Americans and foreigners alike through his unique Rock n’ Roll performance and style.

One of the memorable sights I witnessed while going through the State of Tennessee was the awe inspiring crossing of the greatest and longest River of the United States. It was a wonderful experience, especially that at the time we were crossing the great Mississippi River, one of the marvelous  steamboats known as the “Delta Queens” bearing colorful American Union Jacks happened to be sailing down the river not far from the gigantic bridge we were using way above. All the way to Louisiana the legendary river was flowing and reminding whoever may happen to be crossing it, of the Adventures of Huckleberry Finn and those of Tom Sawyer which, in a nutshell, sum up and highlight the character and spirit of being American.

The Great River had witnessed stories of all types among which some were of black slaves trying to escape slavery ridden Southern States with or without the help of abolitionists. Memphis, Tennessee witnessed important events some of which were happy, others not so happy and yet others were gruesome such as the assassination of the Civil Rights Movement champion Doctor Martin Luther King, Jr. All of those events contributed to the shaping of the spirit of the city and, to a great extent, the destiny of a whole nation. The great Mississippi River keeps all of those historical joys and sorrows in its eternal memory and goes on flowing and inspiring the people dwelling on its immediate banks all the way east to the coast of the Atlantic and west to that of the Pacific.