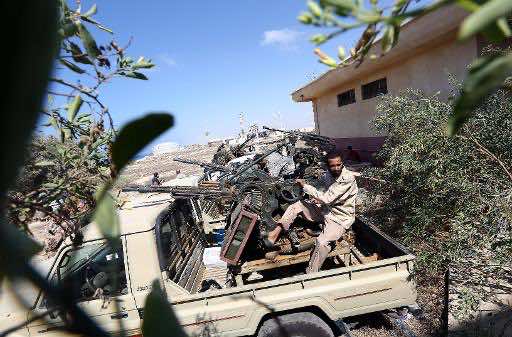 Tripoli — At least two people died in overnight clashes between militias in the centre of the Libyan capital, the health ministry said Friday, terrorising residents and underlining the country’s instability.

The fighting that erupted late Thursday was the latest sign of the growing lawlessness that has plagued Libya since NATO-backed rebels overthrew and killed veteran dictator Moamer Kadhafi in 2011.

Libya’s new authorities have struggled to impose order as many ex-rebels have banded into militias and carved their own fiefdoms in a country awash with weapons looted from Kadhafi’s arsenal.

The latest violence erupted after news broke that Nuri Friwan, a militia chief from Misrata, Libya’s third city which saw some of the most brutal fighting in the 2011 uprising, had died.

Friwan had been wounded on Tuesday when a fight erupted at a checkpoint manned by rebels of Soug al-Jomaa district in eastern Tripoli.

To avenge Friwan’s death, armed members of the Misrata militia drove to Soug al-Jomaa in vehicles equipped with anti-aircraft guns, blocking the main road to the area, witnesses said.

Witnesses and security officials said intense fire and explosions rocked several parts of the capital overnight and could be heard well into the early hours of Friday.

“Each group opened fire into the air as a show of force,” a security official said on condition of anonymity.

A health ministry spokesman said the fighting killed two people and wounded 29 others, but that most of those hurt had left hospital after receiving first aid.

Several buildings were hit by anti-aircraft fire, including the 15-storey Radisson hotel which is used by diplomats and businessmen.

An AFP correspondent saw the impact of bullets on the facade and windows that had been shattered, and said stray bullets fell into many other neighbourhoods of the capital.

A spokesman for the hotel said nobody was hurt.

“The hotel’s security services told us to go down to the basement where we spent most of the night,” a representative of an international organisation staying at the hotel told AFP.

“And today it is as if nothing happened,” she said.

A woman at a butcher’s shop in Hay al-Andalus near the city centre said it was sheer “terror”.

“A rocket fell into my neighbour’s bedroom. Luckily no one was there,” said Khadija, who declined to give her surname.

From 1:00 am (2300 GMT Thursday), a relative calm descended punctuated by intermittent gunfire.

On Friday morning, the weekly day of rest in Libya, it was business as usual in the capital and shoppers crowded the animal market held in the Soug al-Jomaa neighbourhood.

An AFP correspondent who toured the city where fighting had raged only hours earlier said there were no security forces to be seen anywhere.

“The situation has become increasingly critical,” said a Western diplomat, who declined to be named.

“What is quite worrying is that the authorities have not issued any official reaction. They are mere spectators and this shows their weakness and their inability to govern,” the diplomat added.

The ex-rebels who overthrew Kadhafi were hailed as heroes for bringing an end to more than four decades of dictatorship.

But many have rejected government demands to turn in their weapons or join the national security forces, posing a constant threat to the stability of post-Kadhafi Libya.