CAIRO – Saudi Arabia this month plans to send Egypt two shipments of butane gas – worth a total of $75 million – "for free," an official at the state-run Egyptian General Petroleum Company (EGPC) said Friday. 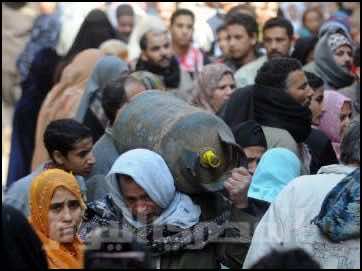 CAIRO – Saudi Arabia this month plans to send Egypt two shipments of butane gas – worth a total of $75 million – “for free,” an official at the state-run Egyptian General Petroleum Company (EGPC) said Friday.

The first of the 700,000-ton shipments is due to arrive in the Port of Suez on Tuesday, to be followed by a second in late November, the official, requesting anonymity, told Anadolu Agency.

The shipments are expected to ease the current nationwide shortage of butane gas, he added.

Millions of Egyptian households rely on butane gas for most of their cooking needs.

That aid includes $2 billion deposited at the Central Bank of Egypt, $2 billion worth of petroleum deliveries, and a $1-billion grant.

The aid is part of a $12-billion aid package to Egypt pledged by Saudi, the United Arab Emirates and Kuwait.

Every month, Egypt – the Arab world’s most populous country – imports some $1.3 billion worth of petroleum products from various producers.

The government sells these products on the local market at subsidized prices, yielding a petroleum subsidy deficit of some $18.6 billion as of the end of the 2012/13 fiscal year.