CAIRO- A child was killed Friday in clashes between backers and opponents of Egypt's ousted president in Cairo, the interior ministry said, amid protests by Mohamed Morsi's backers in several cities. 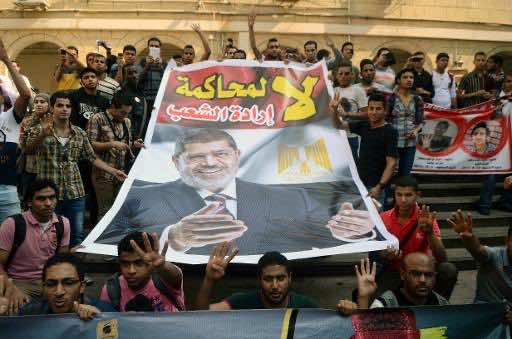 CAIRO- A child was killed Friday in clashes between backers and opponents of Egypt’s ousted president in Cairo, the interior ministry said, amid protests by Mohamed Morsi’s backers in several cities.

Morsi’s supporters have held near-daily protests since his overthrow and arrest by the military on July 3. Several thousand marched on Friday in different provinces across the country.

The 12-year-old boy died in the violence in Cairo’s southern neighbourhood of Giza, where protesters used firearms, wounding three others, the interior ministry said, without elaborating.

Police intervened to stop the violence and arrested several people, the ministry added.

Eight other people were wounded in clashes around Egypt on Friday, the official MENA news agency reported. Security officials also told AFP that policemen had fired tear gas to break up protests in Cairo and Alexandria, Egypt’s second city.

Morsi appeared in court on Monday on the first day of his trial for inciting the murder of protesters outside the presidential palace in December 2012. It was his first public appearance since the military toppled him.

In spite of regular calls to protest, Morsi’s Islamist supporters have been battered by a police crackdown. About 1,000 people have been killed in clashes and more than 2,000 arrested.

The campaign against Morsi’s backers has severely hit their ability to stage large-scale demonstrations.