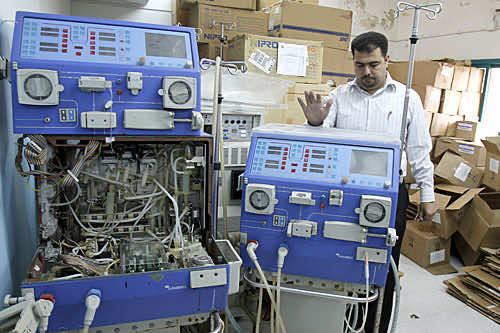 Gaza’s Health Minister Mufid al-Mekhalilati on Saturday raised the alarm on the continued shutdown of the enclave’s sole power plant, saying the closure pushes the seaside strip into a “dark tunnel”.

He warned that kidney dialysis machines, hospital incubators and operation rooms as well as blood banks and hospital labs could stop working because of unrelenting electricity outages and fuel shortages.

This will ultimately deprive 476 kidney failure patients in Gaza from medical treatment and brings to halt the operation of 113 hospital incubators, 45 operations rooms and caesarean birth rooms, blood banks and hospital labs.

The power station supplies about a third of Gaza’s electricity needs. It needs 650,000 liters of diesel for daily operations.

But providing the necessary fuel has become a far-fetched dream for the Gaza-based Hamas government as fuel used to be smuggled from Egypt through underground tunnels along borders.

But the tunnels have come to a standstill following an army crackdown following the July 3 ouster of elected President Mohamed Morsi.

Tunnel owners say that around 400,000 liters of diesel used to enter Gaza via underground tunnels every day.

“Gaza’s health sector as a whole is on edge,” Al-Mekhalilati said. “We expect a catastrophe to happen as a result of the continued shutdown of the power plant.”

He appealed to the international community and human rights groups to “take serious steps to resolve the crisis and protect the lives of patients and citizens”.

The health minister also called on the United Nations and the international community to “pile pressures on Israel to lift its blockade” on the Gaza Strip.

Gaza has been suffering an acute electricity problem for almost a decade since Israeli warplanes bombed the strip’s main power station in 2006.

The suspension of the smuggling operations via tunnels has made the situation even worse. Outages now last for 12 hours every day.

Small amounts of the Israeli fuel are allowed into Gaza every day, but most of these amounts go to the private and commercial sectors.

The one liter of Israeli fuel sells for 7 shekels, whereas the Egyptian fuel is sold for only 3 shekels only (around $1).

Gaza gets 120 megawatts of electricity from Israel and buys 28 megawatts from Egypt, the Gaza energy authority says.

The local power station generates 65 megawatts of electricity, depending on the fuel availability.

There used to be a 50 percent deficit in electricity generation in Gaza, which needs 400 megawatts of electricity to meet its needs.