Somalia's president vowed Saturday he would not halt efforts to restore peace and security to the country in the wake of a car bomb attack in central Mogadishu by Al-Qaeda-linked Shebab rebels. 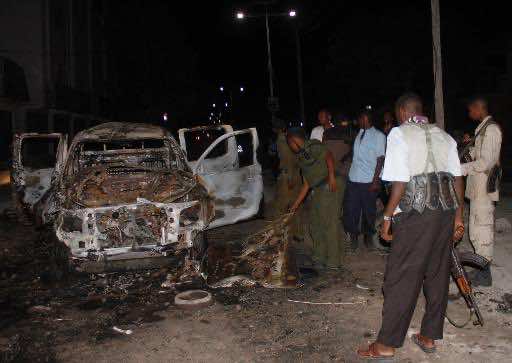 Somalia’s president vowed Saturday he would not halt efforts to restore peace and security to the country in the wake of a car bomb attack in central Mogadishu by Al-Qaeda-linked Shebab rebels.

The huge blast on Friday evening outside a top hotel in Somalia’s capital killed at least four people, including a government official, and wounded 15, according to the government.

“I strongly condemn this heinous act of terrorism outside the Maka al Mukurama Hotel by Shebab, which caused deaths and injuries to civilians,” Somalia’s internationally backed president, Hassan Sheikh Mohamud, said in a statement.

Officials said one of the country’s top diplomats — Abdulkadir Ali Dhuub, a former acting ambassador to London — was killed when the car bomb exploded outside the hotel, which is popular with officials and businessmen.

The statement from the presidency said another blast was averted, with a man carrying a “laptop and explosive items” apprehended while trying to set off a bomb inside the hotel at the same time as the car bomb.

“A group estimated to be 30 to 40 men armed with rocket launchers, machine-guns and hand grenades attacked Bossaso Central Prison,” the regional government said in the statement, adding that its troops “bravely defended the prison and repelled the attackers”.

It said no prisoners escaped during the raid, and that Shebab rebels were being pursued into a nearby mountainous area.

Shebab militants have been pushed out of Mogadishu but still control large parts of the countryside and have continued to strike at the heart of the capital.

In September the group also claimed responsibility for a massacre at an upmarket shopping centre in the Kenyan capital Nairobi that left at least 67 dead.

The latest attack comes as the African Union force in Somalia, AMISOM, is asking the UN Security Council to green-light a boost in its numbers as part of efforts to step up offensive operations against the Shebab.

It also comes after a US army drone strike on a Shebab convoy last month that officials said killed the rebels’ top suicide bomb-maker.