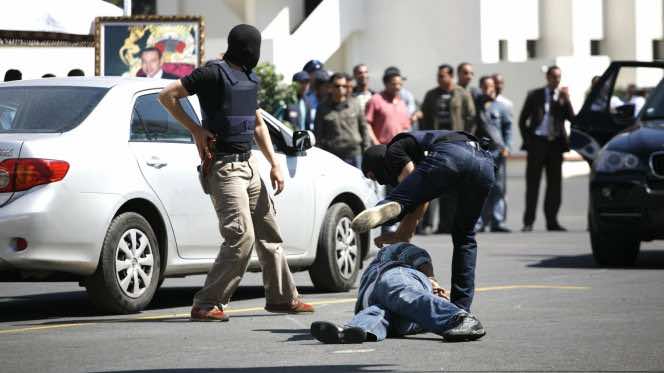 By
youssef sourgo
-
Youssef Sourgo is currently a Master’s student in Linguistic and Literary studies at Ain Chok Faculty of Letters and Humanities.
Nov 10, 2013
Spread the love

Casablanca- Armed assaults are increasingly becoming a customary phenomenon in Casablanca. After the previous armed assault whose victim was a Chinese citizen living in Casablanca, two Moroccans recently shot a Moroccan-French citizen in the Borgone neighborhood, Casablanca.

Since the incident took place in Casablanca last Wednesday, November 6, police have been mobilized in search of the two suspects.

According to Alyoum24, the wanted Moroccan suspects are two 30-year old young people, who were wearing sport suits and hats when they stole a Peugeot 307 car after shooting the owner.

The suspects subsequently abandoned the car at Khalil Boulevard near Ain Diab beach before fleeing away.

Once notified of the incident, police forces were positioned at all entrances to the city in order to ensure the two suspects don’t escape justice.

A rigorous investigation was also launched as soon as the city police was informed of the armed assault, and Casablanca’s police have collected all evidence related to the incident, including two bullets found at Zektouni Boulevard in Casablanca, which were reportedly shot from the same gun used by the suspects.

The victim, a Moroccan born in France, who comes to Morocco to sell used cars, is still under medical care and vigilant police surveillance at Al Andaloss hospital. The victim will reportedly be interviewed as soon as he feels well.

Police forces already interviewed the victims’ wife and relatives and inspected his phone call history in hopes to find any indices that would lead to the arrest of the suspects.