Agadir- When was the last time you saw or heard of someone climbing out of a grave? This isn't a Halloween prank gone bad, nor is it a scene from The Walking Dead. 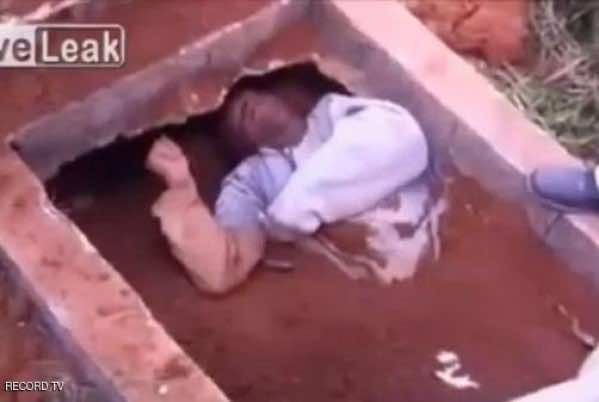 Agadir- When was the last time you saw or heard of someone climbing out of a grave? This isn’t a Halloween prank gone bad, nor is it a scene from The Walking Dead.

According to local reports, an unidentified witness woman was at Sao Paulo’s Ferraz de Vasconcelos cemetery, visiting a relative’s tomb, when she heard noises and dirt moving near a grave. That’s when she spotted a man trying to pull himself from the ground.

“I was terrified to see a man who I thought was dead, trying to get out of the grave.”  the woman told the local authorities who arrived along with the emergency services to find that the resurfacing man had managed to free his head and arms from the ground.

In a video broadcast on local station Record TV, the rescue team is seen pulling the half buried man from the ground .

It is not revealed how the man came to be buried alive, but according to the Daily Mail, it is believed he was buried after being badly beaten up during an argument.

His condition is not officially disclosed, but he is presently at a local hospital for treatment.