TEHRAN – Tehran and the International Atomic Energy Agency (IAEA) reach an agreement on the inspection of Arak?s heavy-water reactor and Gachin mine. 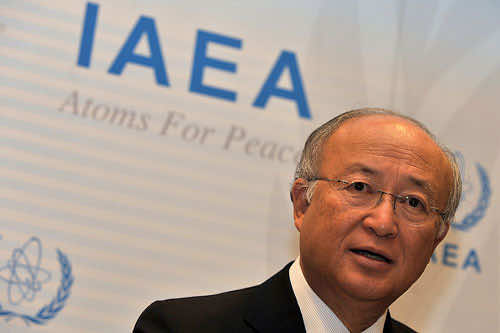 TEHRAN – Tehran and the International Atomic Energy Agency (IAEA) reach an agreement on the inspection of Arak?s heavy-water reactor and Gachin mine.

Vice President and Head of Iran Atomic Energy Organization (IAEO) Ali Akbar Salehi announced on Monday that Tehran and the International Atomic Energy Agency (IAEA) have reached an agreement on the inspection of Arak?s heavy-water reactor and Gachin mine.

Salehi made the remarks after meeting IAEA Chief Yukiya Amano, who arrived in Tehran early Monday to hold talks with Iranian officials on a “new framework for cooperation” between the two sides.

“The voluntary measure was adopted by the permission of the Supreme National Security Council (SNSC) to show Iran’s good will, (otherwise) Iran has not such duty on the basis of the safeguards undertakings,” Salehi told reporters after a meeting with Amano.

He said that the permission was issued after agreement between Iran and the IAEA on a road map for cooperation, as well as the Iranian government’s new approach to voluntarily increase cooperation with the UN nuclear watchdog.

The two sides also inked a joint statement during the meeting.

In relevant remarks on Sunday, Iranian Deputy Foreign Minister Seyed Abbas Araqchi underlined that Iran and the IAEA are due to consider a new framework for continued cooperation.

“The finalization of this new framework of cooperation is in the final stages,” he told reporters in Tehran.

Araqchi expressed hope that the new framework of cooperation would be signed by the two sides during Amano’s visit to Iran.