RAMALLAH – Arafat died dreaming of a Palestine state, but this dream was shattered because of the Fatah-Hamas rift," Ahmad said. 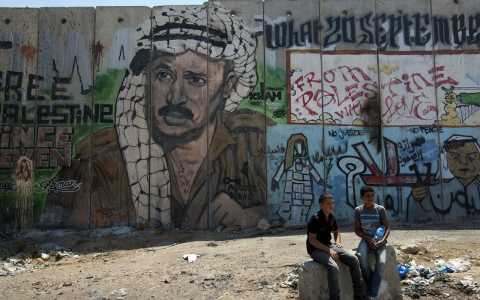 RAMALLAH – Arafat died dreaming of a Palestine state, but this dream was shattered because of the Fatah-Hamas rift,” Ahmad said.

Nine years since his death, Palestinians continue to cherish the memory of iconic leader Yasser Arafat as a source of national unity, especially at a time of ongoing divisions between Palestinian factions Fatah and Hamas.

“Since the death of Abu Ammar [Arafat’s nom de guerre], Palestinians have entered the dark tunnel of Fatah-Hamas division,”  Ashraf Nader, a 28-year-old  IT engineer from the West Bank town of Birzeit, told Anadolu Agency on Monday.

“Arafat would never have allowed this division,” insisted Nader, himself a Fatah supporter.

When Arafat died in 2004, the Palestinian territories were ruled by a single administration and a single leader.

Only three years later, the Palestinian body politic was rent asunder, with the West Bank ruled by the secular, Fatah-led Palestine state and the Gaza Strip ruled by Islamist resistance faction Hamas.

“Arafat died dreaming of a Palestine state, but this dream was shattered because of the Fatah-Hamas rift,” she said.

Arafat, 75, died in France under suspicious circumstances. At the time, doctors were unable to determine the exact cause of death.

But a team of Swiss experts revealed last week that “unexpectedly high” traces of polonium-210, a highly radioactive substance, had been discovered in Arafat’s exhumed remains.

Polonium is found in minuscule amounts in food and is created naturally by the body, but can be fatal if ingested in large doses.

Nader believes that Palestinian suffering has increased with the iconic leader’s passing.

“The pace of Jewish settlement construction has increased, while violence by Jewish settlers against Palestinians is also on the rise,” he noted.

Ahmad, for her part, who does not have any political affiliations, said that worsening conditions in the Palestinian territories had made many Palestinians realize the late leader’s true value.

“Since his death, Israel has stolen more [Palestinian] land, built new [Jewish-only] settlements and accelerated its Judaization campaign in Jerusalem,” she said.

“I will go today to his grave and perform prayers for him,” she added. “I miss him; all Palestinians miss him.”

Palestinians have long accused Israel of being behind the leader’s death.

Earlier this week, leading Fatah member Tawfiq Tirawi, who heads up the Palestinian commission of inquiry into Arafat’s death, described Israel as “the first, primary and only suspect.”

But regardless of how he died, Arafat continues to be remembered as a source of inspiration for the next generation of Palestinians.

“But my father has told me what a brave man he was,” she said. “I only know that I love him.”