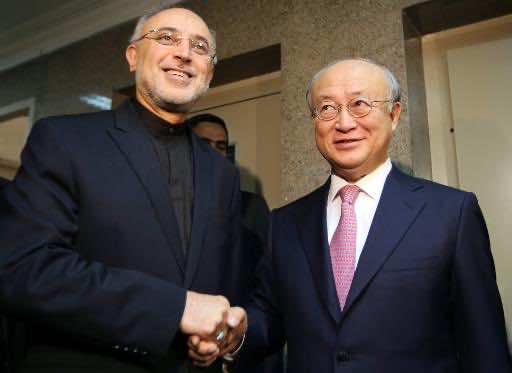 Tehran — Iran agreed Monday with the UN nuclear watchdog on a “roadmap for cooperation” to inspect its disputed programme, as the United States questioned Tehran’s self-declared right to uranium enrichment.

Diplomats insist world powers are close to reaching a landmark interim deal to curb Iran’s nuclear programme in return for sanctions relief despite failing to do so in Geneva over the weekend.

But US Secretary of State John Kerry, during a visit to Abu Dhabi partly aimed at reassuring Gulf allies fearful of a breakthrough with Tehran, said no nation has an “existing right to enrich” and that Iran had balked at the Geneva talks.

“The P5+1 was unified on Saturday when we presented our proposal to the Iranians… But Iran couldn’t take it,” said Kerry, who took part in the high-level talks.

“If we want to be fair, sometimes these comments are made to address certain concerns, or those of the hosting country,” Zarif said without elaborating.

He cautioned that “contradictory remarks — some which are different from what happened out there — and putting a spin on the reality… does not help generate trust in the negotiation process.”

Iran’s President Hassan Rouhani, a reputed moderate whose election this year raised hopes of progress in the decade-long talks, has said Tehran will not abandon its nuclear rights, calling uranium enrichment on Iranian soil a “red line”.

But in an interview with the BBC, Kerry said “right” is the wrong word.

“There is a standard by which they might be able to do something, providing they meet certain standards in order to do it. And that’s what you negotiate about,” he said.

The so-called P5+1 group — Britain, France, the United States, Russia and China plus Germany — and Iran will reconvene again in Geneva on November 20 to try to iron out differences.

The International Atomic Energy Agency (IAEA) meanwhile reached an accord with Iran on a “roadmap for cooperation” during a visit to Tehran by the head of the UN watchdog, Yukiya Amano.

Analysts and diplomats said the framework accord — while preliminary and somewhat vague — was a first step in satisfying the IAEA’s long-standing demands for greater oversight.

The agreement requires Iran to provide information within three months on all new research reactors and identify sites designated for the construction of power plants as well as for uranium enrichment.

“It is rather encouraging,” one Western diplomat said. “Maybe the wording is not perfect but it goes in the right direction.”

The accord does not specifically address the IAEA’s long-stalled probe into alleged efforts by Iran to develop nuclear weapons. Tehran has always insisted its nuclear programme is entirely peaceful.

Amano said inspection of the Parchin military complex, where Iran is alleged to have conducted research on nuclear weapons, would be addressed in “subsequent steps” under the framework.

Iran’s nuclear chief Ali Akbar Salehi said that as a gesture of goodwill, IAEA inspectors would be allowed to visit a heavy water reactor under construction in Arak — seen as a key stumbling block in the Geneva talks — as well as the Gachin uranium mine in the south.

At least a year from completion, the Arak reactor is a major source of concern for Western powers, who fear the plutonium it will produce as a by-product could provide Iran with a second route to an atomic bomb.

Iran insists it wants to produce isotopes solely for medical and agricultural purposes at the Arak plant, which is already under limited IAEA surveillance.

Monday’s agreement foresees the IAEA having direct access within three months to the Arak plant.

“The IAEA does not know right now how much heavy water Iran is actually making and they want to get a good idea about whether and how soon it is going to operate,” said Mark Hibbs of the Carnegie Endowment for International Peace.

The marathon talks in Geneva ended inconclusively on Sunday after France raised concerns over the Arak reactor.

“We are not far from an agreement with the Iranians but we are not there yet,” Foreign Minister Laurent Fabius said Monday.

Fabius fired back at allegations that Paris had scuppered the talks, saying: “France is neither isolated nor a country that follows the herd. It is independent and works for peace.”

His comments were echoed by a senior Western diplomat in Brussels, who said the talks needed more time.

In Tehran, Zarif told state television that an “agreement is still within reach”.