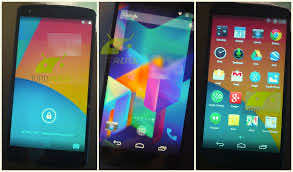 It’s been a week or so since Google unleashed it’s Nexus 5 to the world, running the latest version of Android 4.4, called KitKat, with many improvements in the software and the hardware.

The new version of Android is beautiful. The new visuals are great, and it pleases the eye to look at the eye candy Google has come up with. The grey status bar icons now match the notifications icons color. The whole GUI is now more blackish and greyish than blue. There is also a new set of icons for the phone, camera, and settings apps. The Holo style has been streamlined and it’s now a little cleaner and flatter.

The new Dialer app works like the Yellow Pages; you can look up contacts and it can figure out who you are calling or who’s calling you and show it on the screen. Another great feature is the Host Card Emulation (HCE), Google’s solution to carriers blocking their Wallet app from making payment via Near Field Communication (NFC). HCE lets you use the device’s NFC chip to make payments, and use loyalty programs, card access, transit passes, and other services. This means you can manage payments from the cloud or on the device. Before, you had to toggle GPS, Wi-Fi and the mobile network, but with the new version you get to choose modes based on how much battery gets consumed from high to low accuracy.

The OS itself has been updated and cleaned from the clutter, making it simpler and lighter. According to the announcement page, the OS was designed to operate on devices with a memory as small as 512mb. While this may sound good for the people with low to mid-range devices, this benefit is a little misleading because a device with 512MB of RAM will surely get an update. However, the RAM is not the only requirement for stability of the system; there is also the CPU, GPU and all the other components that are important for a good user experience. The OEM’s lack of a serious commitment to update all of their lineup from 2 years ago with KitKat is unfortunate.

Google tries to solve the issue of fragmentation by not including big features in the new version. The Google Play Services App exists for that. The app has brought some new features to older devices without the need to flash an update or wait for the OEM or the carrier to push it. Instead, the Android team is simply targeting the core of the OS with security updates and enhancing already existing functions.

Security has also been strengthened, making it difficult for apps, such as malicious apps and apps that require root with the new Security Enhanced Linux, to take control over the entire system. This last feature means that the devices released with KitKat will be hard to root and thus customize to the liking of the user. Sadly to say for Google, a developer at xda-developers site rooted, the Nexus 5 in less than 24 hours after he received the device.

Notwithstanding these improvements, I am disappointed because apart from the main features added to Android 4.4 KitKat that will hit the Android Open Source Project, many features on the Nexus 5, such as the new launcher with the implemented Google Now page which I like, are closed source. The lock screen and capturing pictures in HDR+ mode also have become closed source features. Not being open source, these features will not hit the AOSP repository, and as a custom rom user, and many are like me, we won’t get those features unless Google releases them as apps in the Play Store. Until then, dear Google, don’t be evil.