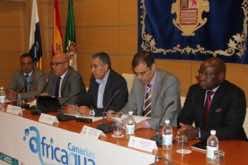 Las Palmas – The future of renewable energy in Morocco was highlighted, Thursday and Friday in Fuerteventura (Canary Islands), during the third international conference on renewable energy and water desalination, “Africagua 2013”.

Participants at a roundtable organized on this occasion presented the Moroccan legislation codifying this sector which has undergone significant change, indicating that this legal arsenal aims to enable private individuals to set up production systems for clean energy for home consumption, and to facilitate the development and marketing of these production systems.

Morocco, where energy consumption is expected to double by 2020, plans to address its dependence on foreign markets and fossil fuels (estimated at 97 pc), they said.

An ambitious investment plan is currently underway for an amount of ê 13.5 billion. The Solar Plan aims to produce 42 pc of the electricity consumed in the country by 2020.

During this meeting, which was attended by the Consul General of Morocco to the Canary Islands, Ahmed Moussa, representatives of the Energy Investments Company, and the national electricity and water utility, participants also discussed the Tarfaya wind farm,under construction, and which will be operational next summer with an estimated production capacity of 300 megawatts, spanning over an area of over 620 ha.

The third edition of “Africagua”, organized by the Chamber of Commerce, Industry and Navigation of Fuerteventura with the assistance of the Autonomous Government of the Canary Islands, and the Canary Institute of technology (ITC), was an occasion to learn about the opportunities offered by the African continent in terms of renewable energies and water desalination.