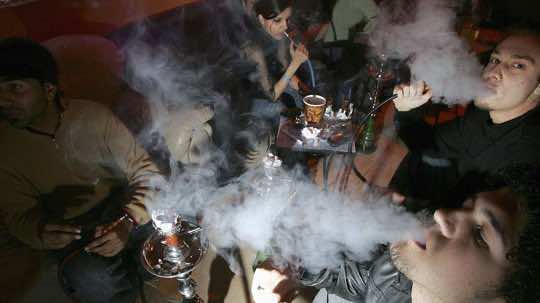 By
youssef sourgo
-
Youssef Sourgo is currently a Master’s student in Linguistic and Literary studies at Ain Chok Faculty of Letters and Humanities.
Nov 12, 2013
Spread the love

“You can count on us,” the Minister of Interior was quoted as responding to Zoubida Bouyad, a councilor from the USFP (the Socialist Union of Popular Forces) party, before the Chamber of Councilors.

“We will amplify efforts in combating the consumption of Shisha in cafes and other places where it is now served,” affirmed Minister Hassad.

Zoubida Bouyad had expressed concern due to the high level of consumption of this product by “minor boys and girls in cafés situated near their middle/high schools.”

According to the same source, the Minister of Interior himself expressed his astonishment at the rapidly increasing magnitude of “this phenomena, which is alien to our culture and customs, yet has developed over the past decade.”

According to the Ministry of Interior, 12,000 hookahs as well as six tons of tobacco (m’aassale, in Moroccan Arabic) were seized in 2012.

In 2013, the number of seized hookahs decreased to 5,000 and only two tons of tobacco were confiscated.

Zoubida Bouayad explained to the Minister of Interior that there is “an urgent need for a law banning the hookah as well as the electronic cigarette, which are seriously threatening the health of our youth.”

“The absence of a law against the consumption of shisha in Moroccan cafés encourages the existence of this phenomenon,” stated Bouayad as quoted by Le360.

Contrary to what most consumers of hookah believe, the tobacco in shisha is no less toxic than the tobacco cigarettes contain, and the water contained in the wastepipe does not filter out the toxic constituents the tobacco is loaded with.

Hookah smokers also inhale more tobacco smoke than cigarette smokers do, simply because of the size of the pipe.

Smoking a shisha pipe also lasts about 60 minutes, which makes the quantity of smoke inhaled by the smoker several times more than the quantity inhaled by a cigarette smoker.

Worse, wastepipes are not always cleaned before they are served to another client, especially in crowded, popular cafés.

Smoking shisha may thus cause the smoker serious health problems, such as cancer and heart disease.