JERUSALEM – Scores of Israeli settlers and intelligence agents on Wednesday stormed the Aqsa Mosque compound in the city of Al-Quds (East Jerusalem), in the latest violation of Islam's thirst holiest site. 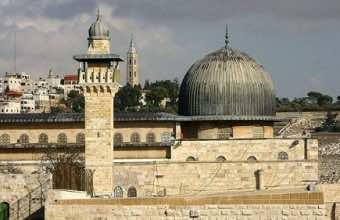 JERUSALEM – Scores of Israeli settlers and intelligence agents on Wednesday stormed the Aqsa Mosque compound in the city of Al-Quds (East Jerusalem), in the latest violation of Islam’s thirst holiest site.

“Al-Aqsa is in serious danger,” he said. “The Islamic world should act in order to defend the holy mosque.”

“Thirty-eight of them entered the Alkibali and Marwani mosques, in addition to the Dome of the Rock,” Abu Nejm told AA.

“In addition to the intelligence agents, 36 Jewish extremist desecrated the Al-Aqsa compound” he said.

The frequent violations anger Palestinian Muslims and occasionally lead to violent clashes in the mosque compound.

Wednesday’s violation took place days after the Knesset (Israel’s parliament) debated proposed legislation that would “divide” the Al-Aqsa site between Muslims and Jews.