Paris- A weekly newspaper with a front page comparing a black government minister to a monkey hit newsstands in France on Wednesday, despite legal objections and a nationwide outcry over the racist slur. 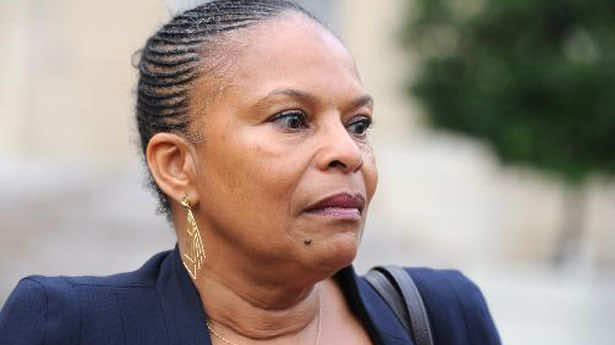 Paris- A weekly newspaper with a front page comparing a black government minister to a monkey hit newsstands in France on Wednesday, despite legal objections and a nationwide outcry over the racist slur.

Amid mounting concern over similar recent incidents, the far-right satirical publication Minute went on sale with a cover featuring a picture of Justice Minister Christiane Taubira and headlines which read: “Crafty as a monkey” and “Taubira gets her banana back.”

The text is deliberately ambiguous: the term “crafty as a monkey” in French can be used as praise while getting your banana back is roughly the equivalent of recovering the spring in your step.

But the provocative cover page was also an obvious reference to two other recent cases of Taubira being publicly likened to a monkey, incidents which have triggered much soul-searching among liberal commentators over a perceived surge in intolerance.

Taubira herself warned last week that the country’s social cohesion was under threat from a disintegration of long-standing taboos on the expression of overtly racist ideas.

Minute’s front page provoked an outcry amongst politicians with many of them calling for the magazine’s editor and publisher to be prosecuted for incitement of racial hatred.

Even the far-right National Front (FN), branded the coverage “extremely shocking and unacceptable.”

Prime Minister Jean-Marc Ayrault registered a formal complaint with the Paris prosecutor over the contents of the magazine.

The move triggered the opening of a preliminary investigation but, in light of France’s strong tradition of freedom of expression, legal experts indicated there was little the government could do to prevent the 40,000 copies of the magazine that have been printed from reaching the public.

A spokesman for the distributor, Presstalis, said it could only block the magazine’s distribution on the basis of a court order, which had not been issued.

Taubira is a hate figure for some on the right in French politics, partly as she was the minister responsible for the legalisation of gay marriage earlier this year.

At the end of last month, a group of children attending an anti-Taubira/anti-gay marriage demonstration were filmed chanting “monkey, eat your banana”.

That came shortly after an electoral candidate of the National Front was expelled from her party for writing on her Facebook page that she would prefer to see the minister “swinging from the branches rather than in government”.

“Today it is a verbal lynching, tomorrow what will it be?” the minister for relations with other French-speaking countries told Nice Matin. “I never thought I would hear the things I am hearing today.”

In a front-page editorial, Le Monde said there were real reasons for concern over the “abject” attacks on Taubira.

“It shows that the expression of a pure and hard form of racism … far from having disappeared, is, on the contrary, becoming commonplace,” the influential daily said.

“Little by little, dykes have been broken, taboos have been lifted, inhibitions have disappeared.

Founded in 1962, Minute was once one of the biggest-selling weeklies in France with its appeal based on a cocktail of right-wing politics, initially centred on opposition to France’s retreat from its former colony Algeria, cartoons and show business coverage.

It’s fortunes have declined considerably since the 1970s with its focus narrowing to an exclusively far-right agenda and it has a record of publishing highly provocative articles with the apparent aim of drumming up publicity.

The most famous example of that was a story before the 2006 World Cup which questioned whether there were too many black players in France’s squad.

Minute was also the first news outlet to report that former president Francois Mitterrand had a secret daughter — although such was its reputation for unreliability that no other media followed up its scoop at the time.