CAIRO- The trial of the Muslim Brotherhood chief and his deputies on charges related to protest deaths will resume on December 11, judicial sources said Thursday, after the previous judges withdrew. 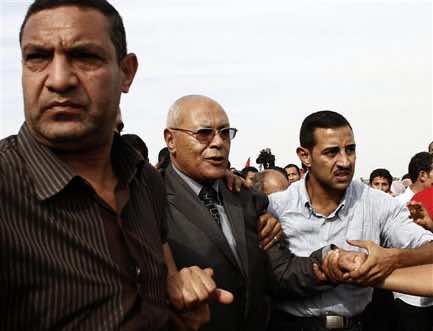 CAIRO- The trial of the Muslim Brotherhood chief and his deputies on charges related to protest deaths will resume on December 11, judicial sources said Thursday, after the previous judges withdrew.

The three judges who had presided over the trial of Mohamed Badie and 34 co-defendants, including his two deputies, rescued themselves on October 29 for what they said were “reasons of conscience”.

Badie and his two deputies, Khairat al-Shater and Rashad al-Bayoumi, face charges of inciting the murders of nine protesters who stormed the Brotherhood’s Cairo headquarters on June 30.

If found guilty, they could face the death penalty.

Three other accused Islamists also face murder charges while 29 are charged with participating in acts of violence.

Millions of protesters on June 30 called for the ouster of Islamist president Mohammed Morsi, accusing him of working for the sole benefit of the Brotherhood, ruining an already dilapidated economy and monopolizing power following the 2011 overthrow of long-time ruler Hosni Mubarak.

Morsi, Egypt’s first democratically elected president, was ousted by the army on July 3.

His supporters deny such allegations and point to the Muslim Brotherhood’s victories in elections held after Mubarak’s overthrow.

Morsi himself was put on trial on November 4.

Badie and other leaders of the Islamist grouping including Essam al-Erian and Mohammed al-Beltagui face charges of inciting violence in the Cairo neighborhood of Bahr al-Aazam that led to deadly clashes in July.

The trials are part of a massive crackdown on the Brotherhood by the military-installed authorities since July 3.

More than 1,000 people have been killed since Morsi’s ouster — mainly his supporters — and the authorities have arrested some 2,000 Islamists, including most of the Brotherhood’s leadership.