Washington - "If some long beard comes along and said I’m going to blow up “Mukhabrat” headquarters or I’m going to take out a bus with “shabeha” and kill myself in the process, at this stage in the game when the population has been this brutalized, this devastated people will say go ahead, have at it because we are not getting help from anybody else." -Michael Weiss (Interviewed by Reuters). 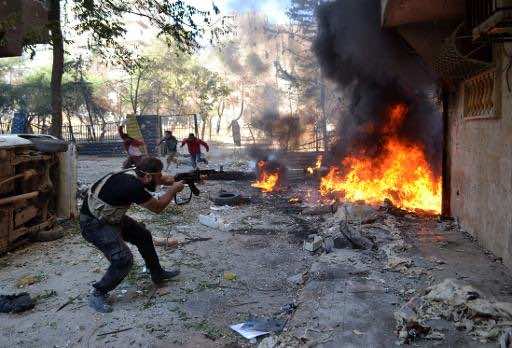 By
Omar al Muqdad
-
Omar al-Muqdad is a Syrian journalist currently living in the United States.
Nov 14, 2013
Spread the love

Washington – “If some long beard comes along and said I’m going to blow up “Mukhabrat” headquarters or I’m going to take out a bus with “shabeha” and kill myself in the process, at this stage in the game when the population has been this brutalized, this devastated people will say go ahead, have at it because we are not getting help from anybody else.” -Michael Weiss (Interviewed by Reuters).

By these words, the journalist starts his interview analyzing the situation in Syria, and how the jihadists are storming the country and finding footsteps there.

In fact, this idea has stormed the media since the revolution turned into an armed insurgency. All of a sudden, we heard analysis of this kind all over the places, even among Syrians, which is, in fact, spread by the opposition and not supported by any evidence.

However, the Syrian revolution started on March 18, 2011, peacefully, and took the form of peaceful civil demonstrations, and sometimes general strikes.

Six million civilians joined this green movement according to the Syrian coordination committee, 80 percent of those between the age of 14 and 60 years old. The Syrians who are fighting on the ground today are less than 80 thousand, according to some surveys, and between 150 to 200 thousands foreign fighters came from outside for jihad.

Now the question is, if that was the Syrian people’s choice, then where have the 6 million protesters gone? Why they don’t pick up arms and join? And last but not least, what is it the FSA?

This leads us directly to the answer that it was not the Syrian people’s choice, but rather a choice that was made from outside the country. It was pushed out by the media, and was implanted in the people’s heads by thousands of wrong analysis and reports.

Even if it was the choice of a few thousand, that does not give legitimacy to the situation. A few thousand cannot rule a whole country. That’s what we call, “hijacking a revolution”!

In fact the revolution was hijacked by some regional powers like Saudi Arabia, Qatar and Turkey, with a full support by USA and UK and some other countries. All with the intention to turn the country into what is called, “self-destruction”. It also serves the purpose of reducing the Iranian influence in the Middle East region, even if it’s going to cost the destruction of Syria.

What is happening now on the ground has nothing to do with the popular revolution. The targeting of the people, kidnaping the journalists, and even kidnapping the revolution activists, is an attempt to force the civilians in the liberated areas to live under Sharia Law without their consent, and decide the future of Syria without the Syrian’s will.

This analysis, which claims to understand the situation in Syria, is only feeding the Propaganda and giving these controlling groups more power to continue in their game.

This is a fight, and only the Syrian people are paying the price!