CAIRO- The defence ministers of Russia and Egypt are locked in discussion on military collaboration between their countries, Russian Foreign Minister Sergei Lavrov said Thursday during a landmark visit to Cairo. 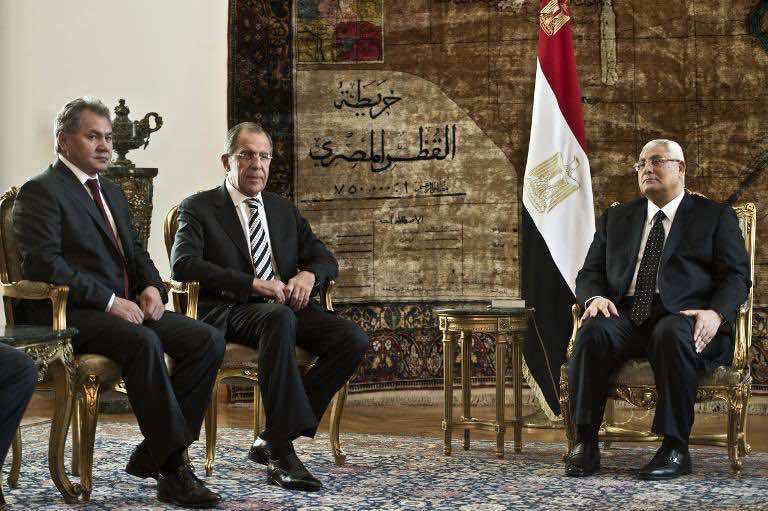 CAIRO- The defence ministers of Russia and Egypt are locked in discussion on military collaboration between their countries, Russian Foreign Minister Sergei Lavrov said Thursday during a landmark visit to Cairo.

Lavrov and Defence Minister Sergei Shoigu are leading a high level Russian delegation on a visit that comes in the wake of a diplomatic spat between Egypt and the United States triggered since the ouster of president Mohamed Morsi.

Shoigu and “his counterpart (General Abdel Fattah al-) Sisi talked on military collaboration” between the two nations, Lavrov said at a Cairo news conference, without elaborating.

Sisi, who is both defence minister and army chief, led a military ouster of Islamist leader Morsi in July, after which he installed an interim government and promised elections.

Fahmy for his part said “bilateral ties between Russia and Egypt are old, in particular in military areas, and this was discussed by the Russian defence minister with his Egyptian counterpart yesterday”.

“Russia can’t be seen as a replacement to anybody else given its heavy weight in the region”.

The talks were conducted as a Russian warship docked at an Egyptian base on the Red Sea, army sources said, adding it was the second such vessel to arrive this week.

The “unofficial” visit was aimed at “strengthening links between the navies of the two countries”, they said.

Lavrov declined to be drawn into commenting on political developments in Egypt, where the army-installed government has launched a massive crackdown onMorsi’s Muslim Brotherhood movement and put most of its leaders, including Morsi himself, on trial.

“Russia is against any foreign intervention in internal affairs and we respect Egypt’s sovereignty and the rights of Egyptian people to determine their future,” he said.

Egypt had close ties with Russia until several years before president Anwar Sadat made peace with Israel in 1979, bringing in roughly $1.3 billion in yearly US military aid over the subsequent decades.

Diplomatic ties between Egypt and the United States soured after Washington suspended some of its military aid to Cairo after Morsi’s ouster.

Since then Egypt has taken a more “independent” tack and broadened its foreign policy, Fahmy told AFP on Saturday.