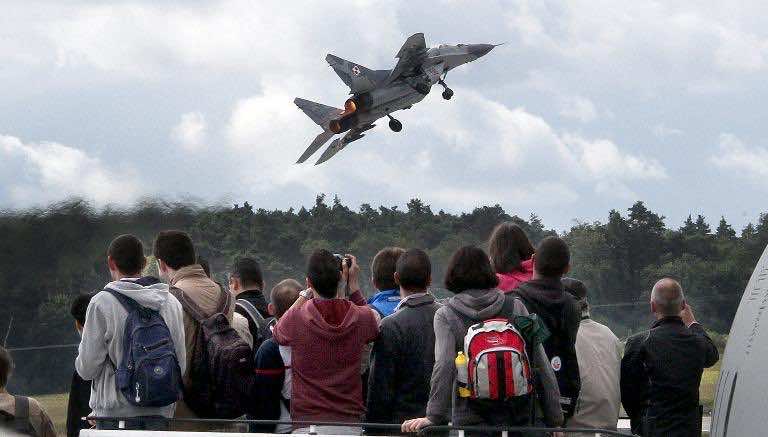 Moscow- Russia is offering to sell Egypt modern helicopters and air defence systems in a landmark deal reportedly worth $2 billion that would mark a revival of large-scale military cooperation, a Russian official said Friday.

Lavrov confirmed that military collaboration was discussed in talks between Shoigu and his Egyptian counterpart General Abdel Fattah al-Sisi but gave no further details.

However Mikhail Zavaly, a senior official with Russia’s arms export agency Rosoboronexport who will lead its delegation at the upcoming Dubai air show, confirmed Russia wanted to sell military hardware to Egypt.

“The word is now with our partners,” he added.

A MIG 29 fighter jet at a air show at the Jamnagar Indian Air Force Base, 350 km from Ahmedabad on O …

He did not give further details but Russian daily Vedomosti said negotiations were ongoing about the sale of MiG-29M/M2 fighter jets, low range air defence systems and Kornet anti-tank rockets.

Citing Russian defence sources, Vedomosti said the deals were worth more than $2 billion and could be financed by Saudi Arabia, which was instrumental in the removal of Morsi.

The Soviet Union was the main supplier of arms to Egypt in the 1960s and early 1970s but cooperation declined after the peace treaty with Israel when Cairo began to enjoy generous US aid.

However Washington suspended some of its military aid to Cairo after Morsi’s ousting and Zavaly confirmed that Moscow had sensed an opportunity.

“There is never a vacuum on the international arms market. If one supplier goes away, then another one appears,” he told RIA Novosti.