The Philippines raised its official death toll from a super typhoon to 3,621 Friday, but it was still below a UN estimate that has caused friction between the world body and the government. 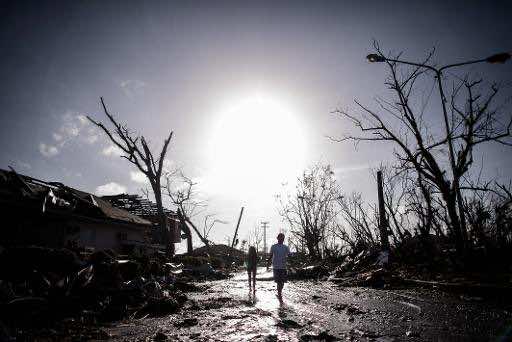 The Philippines raised its official death toll from a super typhoon to 3,621 Friday, but it was still below a UN estimate that has caused friction between the world body and the government.

Reynaldo Balido, spokesman for the National Disaster Risk Reduction and Management Council, said the number of confirmed dead had risen significantly from the previous count of 2,360, adding that 1,140 were reported missing.

“It is the result of reporting by the LGUs (local government units),” he said.

“The LGUs did not report immediately” because “they have to be careful in their reporting. They have to validate everything,” he added.

“The clearing operations of roads and communities are ongoing and we will see if there are more dead bodies (underneath the debris).”

Earlier Friday, confusion deepened when the Philippines agency disputed UN death toll figures, and officials said a police general who claimed 10,000 people might have been killed was removed from his position.

Citing regional authorities, the UN said Friday the latest figure for the number of dead in last week’s storm — one of the most powerful ever recorded — was at least 4,460.

The national disaster council maintained a much lower figure of 2,360, with Balido saying “not true” when asked about the UN’s toll, before raising it later.

The differing counts came as officials said regional police chief Elmer Soria had been removed from his post, adding another twist to a tale which has seen President Benigno Aquino accused of downplaying the scale of the disaster.

“Superintendent Soria and many of our police officers from Region 8 have been through a lot over the past days and they may be experiencing what you might call ‘acute stress reaction’,” national police spokesman Reuben Sindac said.

“As such, it was deemed by higher headquarters that might need to go through some ‘stress debriefing’, hence, his recall.

“A new regional director (not affected by the recent events),” has been appointed “as his replacement”, he added.

The death toll from Super Typhoon Haiyan has been a source of contention and confusion between the UN and the Philippine government for much of the past week.

After Soria made his claim, John Ging, operations director for the UN’s Office for the Coordination of Humanitarian Affairs (OCHA) on Monday said it was estimated that over 10,000 people had died.

The next day Aquino told CNN that number was “too much”, estimating that the final toll would be around 2,500.

The OCHA said their number was acquired from the regional taskforce of the Philippine National Disaster Risk Reduction and Management Council (NDRRMC) on Wednesday.

“As of 13 November, the government reported that 4,460 people have died,” an OCHA statement said.

Asked for the source of the figures, Manila-based OCHA spokeswoman Orla Fagan said: “We are getting it from the operations centre of the regional taskforce set up by the NDRRMC.”

On Thursday UN humanitarian chief Valerie Amos said: “The figure of 10,000 is not a UN figure,” adding that it was put together by local officials.

“We have no way of verifying. I think it will take a long time before we have an accurate assessment of the number of people who have died.”