TRIPOLI - Libyan militiamen opened fire on Friday on a crowd wanting them to move out of their headquarters in southern Tripoli, wounding at least two people, an AFP journalist witnessed. 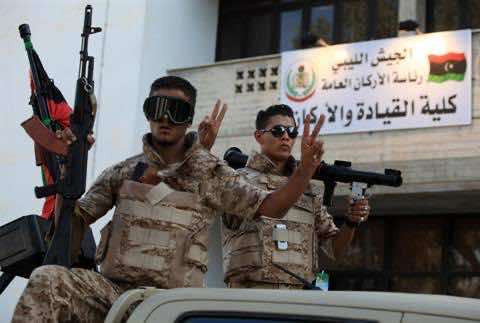 TRIPOLI – Libyan militiamen opened fire on Friday on a crowd wanting them to move out of their headquarters in southern Tripoli, wounding at least two people, an AFP journalist witnessed.

Hundreds of people in the Gharghour district converged on the Misrata militia’s headquarters to press their demands when gunmen inside fired into the air to scare them off.

But when the crowd continued to approach the building, the gunmen started firing at them.

Libya has been troubled by instability and increasing levels of violence, usually involving former rebels who helped overthrow dictator Moamer Kadhafi two years ago but have never disbanded their militias.

The Misrata militia sparked headlines earlier this week when one of its leaders, Nuri Friwan, was fatally wounded in fighting at a checkpoint manned by other ex-rebels.

Two people were killed in subsequent fighting, and one Western diplomat said the situation was becoming “increasingly critical”.