TUNIS- Some 250 Tunisian protesters gathered Friday outside the government's headquarters demanding the resignation of the Islamist-led ruling coalition, with no end in sight for a months-old political crisis plaguing the country. 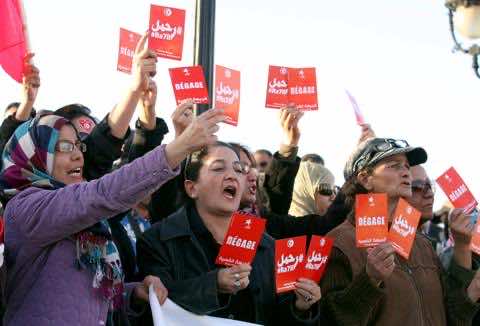 TUNIS- Some 250 Tunisian protesters gathered Friday outside the government’s headquarters demanding the resignation of the Islamist-led ruling coalition, with no end in sight for a months-old political crisis plaguing the country.

At the demonstration, called by the leftists Popular Front, the activists slammed the ruling Islamist party Ennahda, shouting slogans such as:

“Government of failure, leave!” and “Poor people you’ve been had, in the name of religion.”

“This government which led the national dialogue to failure by its lack of commitment, should hand in its resignation as soon as possible,” said Abdelmajid Belaid, whose brother Chokri was shot dead by suspected Islamist gunmen in Tunis in February.

He accused the ruling coalition, and Ennahda in particular, of “doing nothing but impoverishing and terrorising Tunisians.”

Tunisia has been rocked by violence this year, and a second political assassination by suspected jihadists in July has caused political deadlock.

The Islamists have refused the opposition’s demands to step down until key political objectives have been reached.

Under an ambitious roadmap agreed to last month, the two sides pledged to end the crisis by negotiating an interim government of independents, drafting a much-delayed constitution and preparing for elections.

But the dialogue quickly unravelled when they failed to agree on a new prime minister, and talks were suspended.

Mongi Rahoui, another leader of the Popular Front, said the opposition would continue to protest until its demands were met.