Rabat- The long standing good relations Morocco built with the United Arab Emirates seem to be increasingly paying off.

Sheikh Mohammed Bin Zayed Al Nahyan, the crown prince of Abu Dhabi, donated $10 million (approx. MAD 82 million) to the Mohammed V Foundation for Solidarity on the occasion of the national week of solidarity.

The donation is meant to support the foundation’s social and educational projects.

The $10 million donation made by the Emirati crown prince is roughly half the contributions the Mohammed V Foundation for Solidarity campaign is collecting every year.

King Mohammed VI’s repeated visits to the United Arab Emirates were crowned with success after Sheikh Mohammed Bin Zayed Al Nahyan of Abu Dhabi donated $100 million to help the accomplishment of social projects in the kingdom. 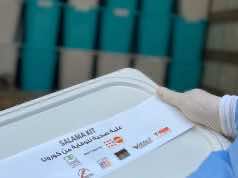 Operation SALAMA to Protect Moroccans With Special Needs From COVID-19