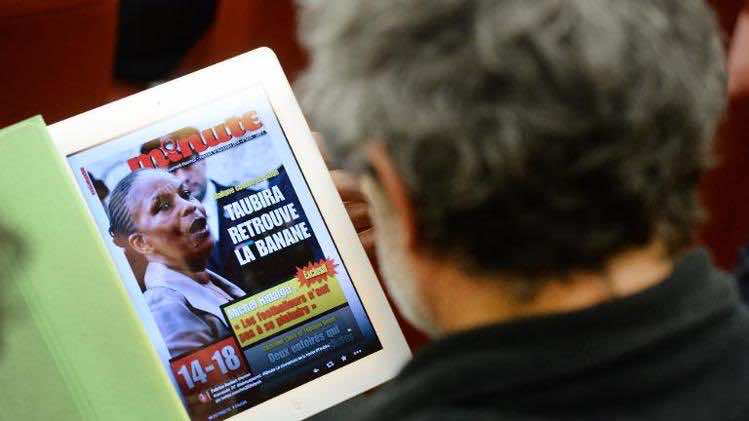 In the latest of a series of attacks on the minister which have triggered a debate over whether taboos on overt racism are collapsing, UMP councillor Claudine Declerck posted a picture of Taubira along with the slogan “Y’a pas bon Taubira”.

The words literally mean “It’s no good Taubira” but they are also a reference to a well-known but now discontinued advertising campaign for Banania, a cocoa-based drink which notoriously featured a caricatural smiling African and the slogan (in pidgin French) “Y’a bon Banania” (Banania is good).

UMP President Jean-Francois Cope took to Twitter as soon as the story broke to announce that Declerck would be drummed out of the centre-right party.

“Wherever it comes from, the hatred of others is not acceptable,” Cope wrote.

Taubira, the most prominent black politician in France, has been subjected to a series of public racist slurs in recent weeks with a right-wing magazine, a candidate of the far-right National Front and a group of children all comparing her to a monkey.

The UN’s human rights body on Friday condemned the attacks as a stark manifestation of the rising racism, xenophobia and intolerance aimed at members of ethnic and religious minorities, as well as migrants, in many European countries.

Taubira herself has spoken out twice about the abuse, once to voice dismay over the lack of support she had received from government colleagues, and then on Wednesday to denounce the magazine that described her as “crafty as a monkey”.

The minister described the Minute weekly’s attack as tantamount to “denying I belonged to the human race”.