Cairo — An Islamist coalition led by the Muslim Brotherhood offered on Saturday negotiations to end the deadly tumult since Egyptian president Mohamed Morsi's overthrow, without explicitly insisting on his reinstatement. 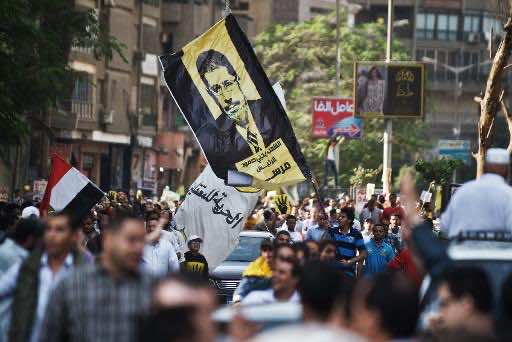 Cairo — An Islamist coalition led by the Muslim Brotherhood offered on Saturday negotiations to end the deadly tumult since Egyptian president Mohamed Morsi’s overthrow, without explicitly insisting on his reinstatement.

The coalition “calls on all revolutionary forces and political parties and patriotic figures to enter a deep dialogue on exiting the current crisis,” it said in a statement.

The coalition, which has organised weekly protests despite a harsh police crackdown, insisted in its statement on keeping up “peaceful opposition” but said it wanted a “consensus for the public good of the country.”

The proposal is the Islamists’ most flexible yet made in public, and comes “with no conditions,” a coalition official said.

It comes after more than 1,000 people, mostly Morsi supporters, have been killed in clashes with police and thousands more have been arrested.

Much of the Brotherhood’s leadership has been put on trial, including Morsi himself.

“We have no conditions, and neither should they,” Imam Youssef, a leader of the Asala party, which is part of the Islamist coalition, told AFP.

But he added the talks must lead to a “democratic” solution, and the coalition wanted them to start within two weeks.

The coalition was prepared to discuss “all solutions that lead to stability.”

The Islamists were prepared to respect the demands of the millions of protesters who took to the streets calling for Morsi’s ouster, Youssef said.

“We want a democratic solution, and it does not necessarily mean we have to be in power,” he added.

Asked if the coalition would insist on Morsi’s return to office, he said: “We don’t want to get ahead of ourselves.”

The Islamists proposed conditions to enter the dialogue, including the release of Islamist prisoners and the reopening of Islamist broadcasters shut down after Morsi’s July 3 overthrow by the military.

They also insisted that the military, which has formally handed power to an interim civilian government, must “return to the barracks.”

Unlike previous offers, which all hinged on Morsi’s return to power prior to negotiations, the Islamists were pointedly vague on their end goals.

They demanded “a return to constitutional legitimacy and the democratic process with the participation of all political groups, without one group monopolising the process or excluding any group.”

The vague formulation allows the Islamists room to manoeuvre.

His reinstatement is often included in what they describe as “legitimacy”, in addition to that of the suspended constitution and senate.

But privately Brotherhood officials have said they might agree to a “constitutional” exit for the president, such as his nominal resignation.

Morsi himself insisted at the start of his trial on November 4 that he was still the legitimate president and could only be removed by a parliamentary vote.

Morsi, a Muslim Brotherhood veteran who headed its Freedom and Justice Party before his election, appeared in court to answer charges of involvement in the killings of opposition protesters.

The interim government will organise parliamentary elections in February or March, followed by presidential elections in the summer.

The Islamist-dominated parliament had been suspended by a court before Morsi’s election in June 2012, and the senate was dissolved on his overthrow.