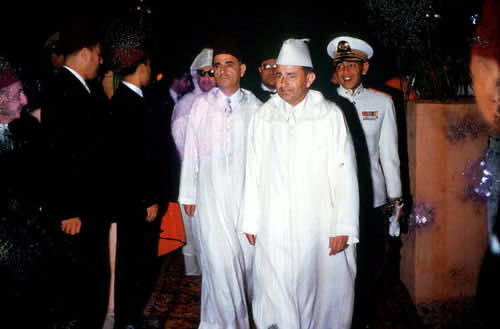 By
youssef sourgo
-
Youssef Sourgo is currently a Master’s student in Linguistic and Literary studies at Ain Chok Faculty of Letters and Humanities.
Nov 18, 2013
Spread the love

After his return from Madagascar, late King Mohammed V proclaimed the independence of Morocco in 1955, thus officially liberating Morocco from the colonial shackles that suffocated its people, oppressed their dreams and took all that was valuable to them.

Lying behind this significant day are years of struggle and resistance to an oppressive colonial presence that stripped Moroccans off their freedom since 1912, the year wherein the French protectorate was signed, thus kicking off their occupation of Morocco.

For its part, Spain was given segments of the Moroccan land in the far north as well as the south of the now-called Western Sahara. Tangier, the city stretching its hands to Europe, was given an international status. Though Morocco maintained its sovereignty over its land, it remained symbolic, while the colonizers gained full control of the country’s most vital sectors.

Patriotic Moroccans realized that if they remained arms-folded, they would witness the shattering of every single piece of puzzle constitutive of the Moroccan identity. It is there where Moroccan nationalism sprang, initially deploying peaceful means of resistance (such as the press), and gradually shifting to an abrasive and vehement resistance, especially after the Sultan Mohammed V was forced to leave the country in 1953.

The popular Sultan Mohammed V, along with nationalist parties. incessantly negotiated the independence of his Morocco while gradually starting various reforms in the kingdom, one of which was transforming Morocco into a constitutional monarchy with a democratic government. Negotiations for independence from France and Spain were done separately and on different dates in 1956, culminating in the independence of the Kingdom after 44 years of French-Spanish colonial presence. Later on, Morocco restored control over Tangier.

November 18 is the day the popular King Mohammed V proclaimed the freedom of Morocco from its colonial shackles. This day marks a watershed event in the history of this kingdom, the day Moroccans regained hope in seeing their nation moving forward after 44 years of colonial rule.

Since then, all Moroccans, here and abroad, have celebrated the Independence Day. It symbolizes a unifying attachment that brings all Moroccans together in commemoration of their independence.

The Independence Day is a national equalizer. The rich and poor, the young and old, the illiterate and the intellectual, the decision-maker and the citizen all celebrate one watershed event, and glorify the greatness of this nation, one that said ‘No’ to colonial oppression and ‘Yes’ to freedom and hope for a better tomorrow.