WASHINGTON- The US military said Monday it hopes to train 5,000 to 8,000 Libyan army troops as Tripoli struggles to contain violence from heavily armed militias. 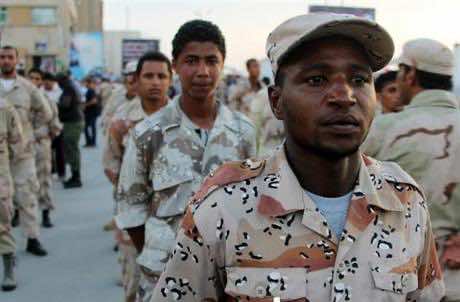 WASHINGTON- The US military said Monday it hopes to train 5,000 to 8,000 Libyan army troops as Tripoli struggles to contain violence from heavily armed militias.

The training, requested by Libya’s prime minister, would be carried out by the military’s Africa Command at a base in Bulgaria, Pentagon spokesman Colonel Steve Warren told reporters.

“We’re in discussions with the Libyans on the exact number, but we’re prepared to provide training for 5,000 to 8,000 personnel,” Warren said.

“This hasn’t been finalized yet, but that’s the plan we’re working towards,” he said.

The program would focus on basic combat training for conventional Libyan troops, he added.

The duration and cost of the training remained unclear as well as whether the Pentagon would provide weapons or equipment to Libyan forces.

There were also plans to train a separate counter-terrorism unit, Admiral William McRaven, commander of US Special Operations Command, said over the weekend.

Training government forces in a country plagued by volatile divisions and militias with shifting loyalties will carry some dangers, McRaven acknowledged.

“There is probably some risk that some of the people we will be training with do not have the most clean record,” McRaven said Saturday at a defense forum at the Ronald Reagan Presidential Library in Simi Valley, California.

“At the end of the day, it is the best solution we can find to train them to deal with their own problems,” said the four-star admiral, known for overseeing the 2011 raid that killed Al-Qaeda leader Osama bin Laden.

Ex-rebels helped topple dictator Moamer Kadhafi in 2011 but have since formed powerful militias, with some groups refusing government appeals to disarm or join the army.

Violence erupted in the Libyan capital of Tripoli over the weekend when militias fired on a protest against the former rebels.

Government troops deployed on Monday, and the militias were ordered to leave the city.