MOSCOW- The head of Russia's state industrial holding company said on Monday that Moscow had reached an agreement to deliver air defence systems to the Egyptian army. 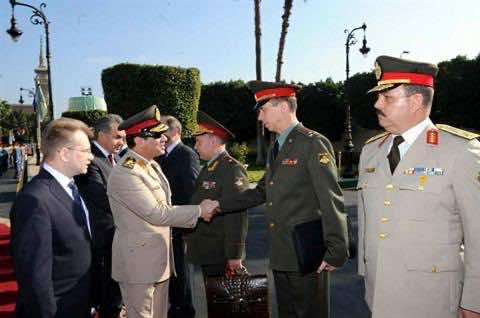 MOSCOW- The head of Russia’s state industrial holding company said on Monday that Moscow had reached an agreement to deliver air defence systems to the Egyptian army.

He did not provide any financial details and did not specify which type of missiles the deal involved.

Chemezov added that the two sides were also discussing the delivery of Russian helicopters and jets.

Moscow’s Vedomosti business daily reported on Friday that the deals under discussion were worth more than $2 billion and could be financed by Saudi Arabia.

Chemezov confirmed that Egypt’s new rulers were discussing funding options with their regional allies “and also want to ask Russia to extend them a corresponding loan.”

The Soviet Union was the main supplier of arms to Egypt in the 1960s and early 1970s, but cooperation declined after Israel and Egypt signed a peace treaty and Cairo began receiving generous US aid.

But Washington suspended some of its military aid to Egypt after the ousting of Islamist president Mohamed Morsi in July, and Moscow has been keen to fill the resulting void.