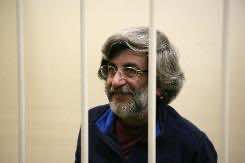 The ruling came after the Saint Petersburg court on Monday freed the ship’s doctor, Yekaterina Zaspa, and a freelance photographer working for Greenpeace, Denis Sinyakov, on bail.

But another Saint Petersburg court extended the pre-trial detention of an Australian activist, Colin Russell to February 24, a day after the end of the Sochi Winter Games.

The crew members were jailed in September after their ship was seized at gunpoint by Russian security forces following an open-sea protest against Arctic oil drilling.

Their detention caused an international outcry with stars including Madonna and Paul McCartney and politicians such as German Chancellor Angela Merkel calling for their release.

The 28 activists and two reporters from 18 countries were first charged with piracy, which carries a maximum sentence of 15 years. The charges were later changed to hooliganism, which carries a punishment of up to seven years.

Hearings on whether to detain the others for a further three months of pre-trial detention were set to continue Tuesday morning at the two Saint Petersburg courts.

A decision was expected shortly on whether to detain Brazilian activist Ana Paula Maciel after her hearing was cut short on Monday.

A prosecutor said Monday that he was not against Maciel also being freed, Greenpeace said on Twitter.