CAIRO- An Al-Qaeda-linked group claimed responsibility on Tuesday for the assassination of an Egyptian officer involved in a crackdown on Islamists following the military's overthrow of president Mohamed Morsi. 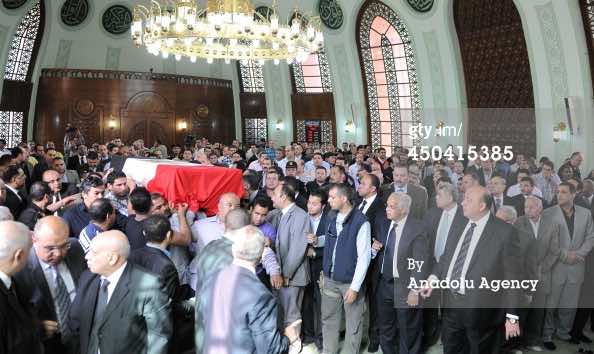 CAIRO- An Al-Qaeda-linked group claimed responsibility on Tuesday for the assassination of an Egyptian officer involved in a crackdown on Islamists following the military’s overthrow of president Mohamed Morsi.

Mabruk was “one of the major tyrants of the state security apparatus, and the (attack) was a response to this malicious apparatus’s arrest of free women,” said a statement, posted on a militant Islamist Internet forum.

The Sinai-based group had previously claimed it bombed the interior minister’s convoy in a failed assassination attempt.

It said its attack on Mabruk was the first in a “series of operations (titled) ‘freeing the female captives from the tyrants’ hands.'”

Egypt’s prosecutor has referred 15 women and seven girls to trial for allegedly taking part in a pro-Morsi protest that turned violent in the Mediterranean city of Alexandria last month.

More than 1,000 people, mostly Morsi supporters, have been killed in clashes with police since the Islamist’s ouster in July, and thousands have been arrested.

Mabruk had been due to testify this week against Morsi, who is accused of working with groups such as Palestinian Hamas and Lebanese Hezbollah to escape from prison during the popular 2011 uprising that toppled Hosni Mubarak.

Sinai based militant groups such as Ansar Beit al-Maqdis escalated their attacks after his ouster, and have expanded to targeting security forces outside the restive peninsula.

In its statement, the group said Mabruk’s assassination was carried out by its “Mutasim Billah Battalion.”

That title is apparently a reference to a 9th century Muslim caliph who is said to have fought to avenge the capture of a Muslim woman.

The militant group solicited “any information, through our modest electronic means, that helps to track these tyrants,” referring to the interior ministry.

The military has sent armour and soldiers to Sinai to uproot the militants, who have continued almost daily attacks that have killed more than 100 policemen and soldiers in the peninsula since July.