Cringe-inducing it may be, but the design of Qatar’s recently unveiled World Cup 2022 stadium has proven to be worth talking about. 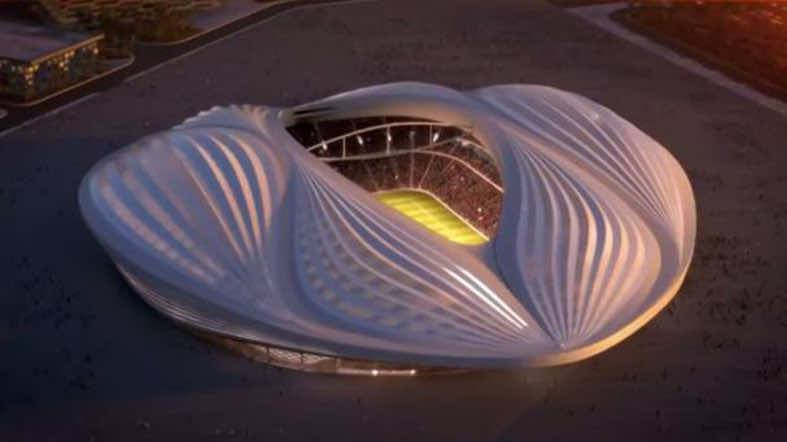 Cringe-inducing it may be, but the design of Qatar’s recently unveiled World Cup 2022 stadium has proven to be worth talking about.

The artificial rendering of the al-Wakrah stadium was meant to look like a boat, but instead it’s been dubbed the “accidental vagina” in the press this week.

“The Qatari stadium’s resemblance to a woman’s private parts may be unintentional, but I for one applaud it,” wrote Holly Baxter in the Guardian.

The feminist website Jezebel commented: “Any discerning human will be quick to recognize that the building looks exactly like an enormous vagina.”

This is not what the architects intended. The design is supposed to resemble the sails of a dhow boat which was traditionally used for pearl fishing by Qataris.

When describing the stadium, Hassan al-Thawadi, the general secretary of Qatar’s 2022 committee said in a statement: “Al-Wakrah is the first of six stadiums already in the latter stages of the design process, our committee has issued 10 major tenders to the market encompassing project and design managers and stadium-operation consultants.”

Aecom, the firm that won the al-Wakrah stadium contract along with Zaha Hadid Architects, explained the concept: “Inspired by the dhow boat that carried generations of local fishermen and pearl divers, the stadium weaves together Qatar’s past with its progressive vision for the future.

“Sustainable materials and practices will be used throughout the stadium and the pitch and spectator stands will be cooled to a perfect temperature for football,” added the firm in a released statement.

When Al Arabiya News contacted Aecom on Wednesday, a spokesperson declined to comment at this time.

“Our communications team has not allowed any information to be given at this stage,” a spokesperson at the firm said.

“A statement in response to the news may be released in a month or two.”

Designers ‘having a laugh?’

In remarks to Al Arabiya News, Guardian columnist Baxter said she was “surprised” how her article on the stadium took immediate flight.

“I was surprised that the piece went viral so quickly – but then again, buildings that look like vaginas are few and far between.

“I do like to think that this is Zaha Hadid having a laugh with the incredibly conservative Qatari authorities, whether consciously or unconsciously. But I do think that the publicity the stadium has now had will probably prevent it being built, which is a tragedy for all of us with female genitalia who were so looking forward to seeing our vulvas reproduced on the Qatari skyline.”

When asked about reactions to her piece, Baxter said: “The response I’ve had was overwhelmingly positive and amused; I haven’t been lucky enough to hear from anyone in Qatar, as far as I know.”

The football stadium is set to have a capacity of 40,000 people and is slated to be completed by 2018, said Hassan al-Thawadi, the general secretary of Qatar’s 2022 committee in a released statement.

The news was reminiscent of a story which sparked similar controversy in 2011, when a Saudi Sheikh asserted that an airport north of Jeddah resembles a penis and vagina.

Sheikh Ali Buqna criticized designers of the revamped airport from creating what he deemed to be “a Western conspiracy.”

Buqna said the aerial view of the airport resembled the shape of a woman laying down, as well as a “phallic” control tower.