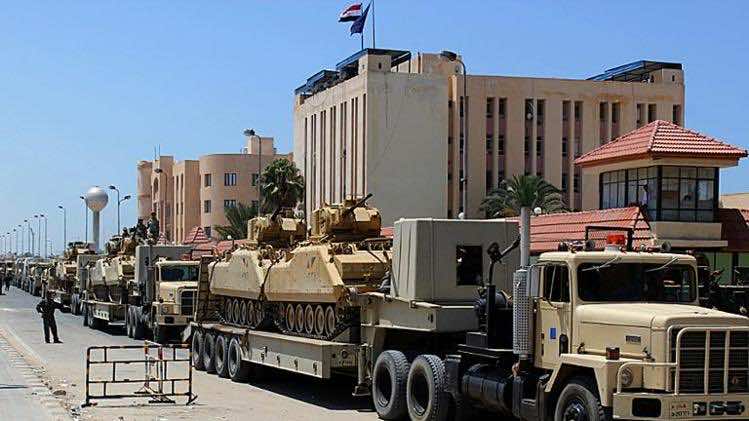 Cairo- A car bomb in Egypt’s restive Sinai killed 11 soldiers Wednesday, while another blast struck police in Cairo, in the latest in a spate of attacks following Islamist president Mohamed Morsi’s ouster.

The troops died when an explosives-laden car blew up next to an army bus in North Sinai’s provincial capital El-Arish, a security official said. The army confirmed the attack, saying nine conscripts and two non-commissioned officers died.

In northern Cairo, assailants hurled an explosive device at a checkpoint, wounding four policemen, including a major hit in the face and back by shrapnel, security sources said.

The Sinai bombing, which also wounded 34 soldiers, was the deadliest in the region bordering Gaza and Israel since an August 19 ambush on a convoy of security forces that killed 25 policemen in the North Sinai town of Rafah.

“This matter will only increase our determination,” he said in televised comments afterwards.

Militants have stepped up a campaign against security forces in the mountainous and underdeveloped Sinai since Morsi’s ouster on July 3, killing dozens of troops and police in near-daily attacks

That was claimed by Ansar Beit al-Maqdis, an Al-Qaeda-inspired group based in the Sinai that said Tuesday it was also responsible for Sunday’s assassination of police Lieutenant Colonel Mohamed Mabruk, who was involved in an ongoing crackdown on Islamists.

Ansar Beit al-Maqdis said the attack on Mabruk was the first in a “series of operations.”

A video uploaded on YouTube also showed the group claiming an October 10 attack south of El-Arish that killed four soldiers and a policeman.

Interim president Adly Mansour denounced the latest Sinai bombing as “a terrorist attack,” while the military said it was chasing the perpetrators who fled towards the town of Sheikh Zuwayed.

Egypt has been plagued by unrest since the army stepped in to remove Morsi amid massive protests against the turbulent one-year rule of the country’s first freely elected president.

The government has poured troops and armour into the restive peninsula to combat growing militancy, while it has waged a crackdown on moderate Islamists elsewhere.

Morsi’s Muslim Brotherhood renounced violence decades ago and says it is committed to peacefully opposing the coup that toppled him. But most of its top leaders, including Morsi, have been jailed, raising concerns that breakaway factions could turn to violence.

Some 2,000 Islamists have been arrested and more than 1,000 people killed since mid-August, when security forces brutally dispersed large pro-Morsi protest camps in Cairo, leading to clashes in which hundreds died.

‘The revolution is still not over’

Despite the crackdown, Morsi’s supporters have regularly protested in Cairo and other cities against the military-installed government, often igniting street clashes with the security forces and the ousted president’s opponents.

But the Islamists did not participate in demonstrations in Cairo’s central Tahrir Square that turned violent late Tuesday, when two people were killed and 26 wounded as riot police stormed in.

Police backed by armoured vehicles fired tear gas and birdshot to scatter protesters who had gathered to mark the anniversary of deadly demonstrations in November 2011.

Those protests were against the Supreme Council of the Armed Forces (SCAF), which ruled between the overthrow of long-time strongman Hosni Mubarak in 2011 and Morsi’s election in 2012.

split between Morsi’s supporters and those who backed the military overthrow, but Tuesday’s protesters accused both sides of betraying the goals of the 2011 revolt that ousted Mubarak.

In November 2011, at least 43 protesters were killed in several days of clashes with police in Mohamed Mahmud Street just off Tahrir Square.

That fighting was the first serious revolt faced by the SCAF.

Some of the protesters on Tuesday night were enraged by a monument built in the square.

They accused the government and police of revising the history of the Mohamed Mahmud clashes amid a wave of pro-military nationalism following Morsi’s overthrow.

Mahmoud Hisham, a 21-year-old student, said: “The revolution is still not over. In three years, we’ve had three systems and three traitors — Mubarak, the military and the Brotherhood.” 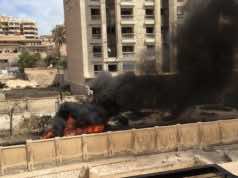