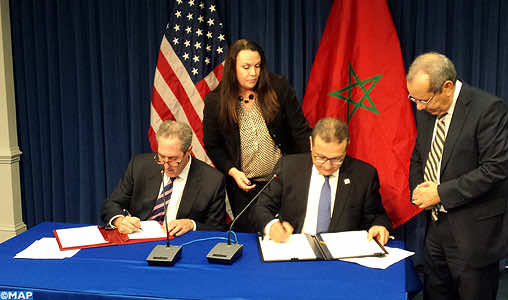 Washington – Morocco and the United States signed in Washington on Thursday a bilateral agreement on trade facilitation to promote trade between the two countries, particularly through the simplification of customs and administrative procedures, according to MAP.

The agreement was signed in the context of the official visit of of King Mohammed VI in the United States at the invitation of President Barack Obama.

The agreement, signed by the Minister of Economy and Finance, Mohamed Boussaid, and the U.S. Trade Representative (USTR ), Michael Froman, is part of the promotion of free trade agreement (FTA ) in force between the two countries since 2006, and intends to boost Morocco’s competitiveness and improve the trading environment in the Kingdom.

Morocco is the “the first country in the region to conclude a bilateral agreement on trade facilitation” with the United States of America and to endorse the ” joint principles on investment ” and “trade in services related to technology information and communication,” according to the Office of the U.S. Trade Representative .

Since the entry into force of the FTA in 2006, trade between Morocco and the United States marked a significant increase, as evidenced by the volume of bilateral trade, which saw an overall increase of 300 pc .

U.S. foreign direct investment in Morocco have also quadrupled over the same period, to $ 613 million dollars in terms of stock market investments in 2012, according to the same source .