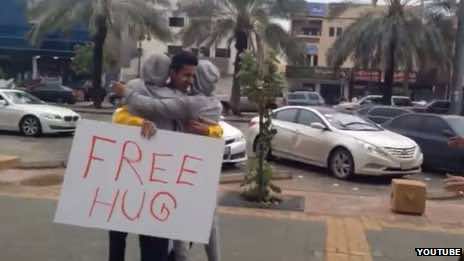 By
Larbi Arbaoui
-
Larbi is a freelance writer and assistant editor at Morocco World News.
Nov 22, 2013
Spread the love

Taroudant- Two Saudi Arabian men were arrested by the religious police after taking to the street offering free hugs to passers-by in the ultra-conservative Muslim kingdom’s capital, Riyadh.

Inspired by a YouTube video, Abdulrahman al-Khayyal, 21, took to the street with his friend carrying a placard saying “free hug.”

Britain’s daily Independent reported that Abdulrahman al-Khayyal was “apparently inspired by a viral video of a campaign posted on YouTube earlier this week.”

The two men were subsequently arrested by the Commission for the Promotion of Virtue and Prevention of Vice (which is charged with ensuring that sharia law is strictly adhered to) for violating local laws and engaging in “exotic practices”, Al Hayat newspaper said as reported by the Independent.

The two men were arrested and their ‘free hugs’ banners seized, according to CNN Arabic.

Even though the two were reportedly required to sign a pledge that they would not offer hugs again, the campaign gained many supporters and followers on twitter. 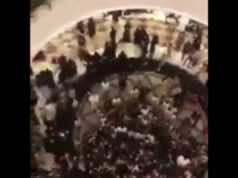