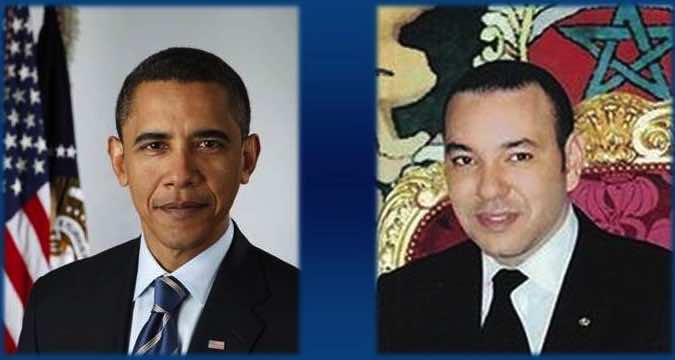 WASHINGTON- President Barack Obama praised the “leadership” of Morocco’s King Mohammed VI on Friday after holding wide-ranging talks with the North African monarch for the first time at the White House.

In a joint statement released by the United States and Morocco following the talks, Obama applauded the king for “deepening democracy, promoting economic progress and human development” in the past decade.

Obama also welcomed the king’s vow to end the practice of trying civilians in military courts, the statement said.

“The two leaders reaffirmed their commitment to the UN human rights system and its important role in protecting and promoting human rights and fundamental freedoms,” the statement said.

The two nations also “reaffirmed their commitment to continue to deepen civilian and military cooperation in the areas of non-proliferation and counterterrorism,” it added.

Ties between the United States and Morocco have shown signs of tension this year following a US proposal to task UN peacekeeping forces in the disputed region of Western Sahara, which Morocco annexed in 1975, with a human rights monitoring mandate.

The Algeria-backed Polisario Front wants independence for the territory through a self-determination referendum.

A 2007 proposal from Rabat advocated a plan for a high degree of autonomy while retaining all “attributes of sovereignty, such as the flag, the national anthem and the currency.”

Morocco remains a key strategic ally of the United States, and has “non-NATO major ally” status, allowing it access to US arms sales.